Following on from our We &#x2764 Hawkeye entry last week, we felt it fair to balance the comment with our love for DC’s equivalent archer supreme, Green Arrow!

Predating Hawkeye by some 23 years, Green Arrow initially bore many similarities to Batman and while that was originally the plan, over time he evolved into his own distinguishable character. With a much more diverse and intricate (were talking ‘Crisis’ here, folks) history than Marvel’s bowman, the New 52 take on Oliver Queen seems to be more inspired by Justin Hartley’s portrayal of Green Arrow in the Smallville TV series. Increased interest in the character following his Smallville appearance and influenced by the gritty take on Batman in Christopher Nolan’s Dark Knight Trilogy has led to the debut of Arrow, the new TV show revolving around the ‘Emerald Archer’.

The show is proving very popular and has been renewed for a second season. Check it out on Monday and Thursday nights on Sky1 in the UK, it’s well worth a watch.

With a new creative team of writer Jeff Lemire and artist Andrea Sorrentino assigned to Green Arrow from issue #17 onwards, it looks to be taking a dark and exciting new turn. If you’re only reading Batman at the moment, maybe you should give this guy a try!

We have a number of Green Arrow comics and graphic novels available in our eBay store. 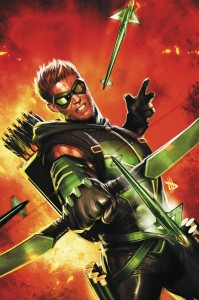 You can sign up for a Six Issue Subscription to Green Arrow here.

Digital comic fans can buy all of the issues of the New 52 Green Arrow in our Comixology Digital Store!