Hawkeye’s profile in the Marvel universe has been raised significantly in the past year following Jeremy Renner’s great performance as the world’s greatest marksman in the Avengers movie. The Marvel NOW! relaunch schedule gave the publishers the opportunity to capitalise on the increase in Hawkeye’s popularity, and Matt Fraction, currently one of the best writers working for Marvel, was attached to the project. He was joined by Spanish comic book artist, David Aja and the new Hawkeye series was born.

Fraction and Aja have given Hawkeye an ‘indie’ feel, unfamiliar in a core title, focusing on the ‘everyman’ aspect of Clint Barton and his (albeit superhero incorporated) day-to-day life. The book is full of great humour, strong characterisation and outstanding dialogue, while the somewhat disjointed structuring fits the style perfectly. David Aja’s art is loose and unabrasive, with a level of detail that keeps it ‘real’ and his covers are truly exceptional, every single issue! If you’re not reading Hawkeye, it’s the one of the Marvel titles we’d strongly recommend. If you are already reading Hawkeye, you’ll know exactly what we mean.

The first collection, Hawkeye Vol.1: My Life As A Weapon, is due out on March 26th with Vol.2: Little Hits due June 25th. ACE Economic Subscription customers can add Hawkeye to your monthly orders, while if you fancy picking up half-a-dozen issues without having to sign up for an account, you can buy a hassle-free, Six-Issue Subscription here. Take a look at all of the comics we have available below… 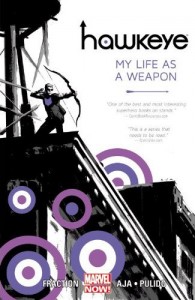 Fraction. Aja. Hawkeye. Kate Bishop. Cars. Guns. And videotape. The breakout star of this summer’s blockbuster Avengers film, Clint Barton — a.k.a. the self-made hero Hawkeye — fights for justice…and good rooftop BBQs! And with ex-Young Avenger Kate Bishop by his side, he’s out to get some downtime from being one of Earth’s Mightiest Heroes! Matt Fraction and David Aja (Immortal Iron fist) reunite to tell the ongoing tales of the Arrow-Avenger. Barton and Bishop mean double the Hawkeye and double the trouble! Plus: Relive Kate’s first meeting with Clint, as she learns wanting something can be miles away from actually earning it.

You can buy all of the issues of Hawkeye in our Comixology Digital Store!