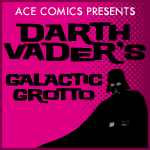 Darth Vader was a big hit when he visited ACE Comics in Colchester on Saturday. Apart from the weather bearing striking resemblance to the ocean exoplanet Kamino, and having trouble finding enough parking spaces in a row for his Star Destroyer, the Dark Lord of the Sith was on hand with his Imperial forces including […]

ACE Comics is proud to announce the festive return of Darth Vader and his Imperial Troops to our Colchester store for Darth Vader’s Galactic Grotto! On 22nd December 2012, the Dark Lord of the Sith will be visiting the Colchester store to hear what you want for Chrsitmas …and he should know – he’s felt […]