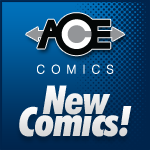 This week’s titles are due to hit shelves on Wednesday, 5th December. Featured in this week’s comics are the following… ★ PICK OF THE WEEK ★ AVENGERS #1 MARVEL COMICS The greatest heroes in comics together on one unbeatable team! Now shipping twice a month, the Avengers “go large,” expanding their roster and their sphere […]