To round January off, we thought we’d present you with the musings of our illustrious leader on the year ahead in comics, lifted straight from January’s edition of our free webzine, Illuminations (which you can learn more about here).

The year 2013 saw quite strong growth for our mail order and shop sales and I believe the industry in general saw an increase in sales. More and more people are becoming accepting of the medium of comics. This is partly driven by the plethora of comic based movies, a large part by The Big Bang Theory, and a considerable part by digital comics and web only comics.

For 2014 I see an increase in sales again , driven by the independent market more than the big two. Marvel, I feel, have got themselves embroiled in a self defeating arc of never ending number ones and re-launches. All I can report is that each time they re-launch, the spike in interest gets smaller and smaller and the drop off is bigger within a few issues. They, Marvel, seem to be chasing or creating a niche market of customers who only buy into a title for one to four issues and have a short attention span.

DC having ditched past continuity are in danger of creating a new continuity which is semi-entwined with pre 52 stories and will ultimately chase itself up it’s own tail.

Whereas these stories keep new readers intrigued for a few years they have lost the art of creating the soap opera world which kept the readers coming back month after month after month, in fact for decades. 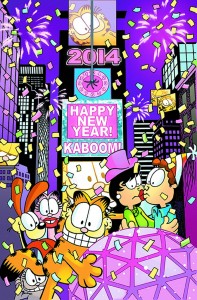 The task of keeping readers interested and drawing in younger readers to the medium is falling to the smaller publishing house.
Boom have a truly excellent stable of all ages comics: Adventure Time, Peanuts, Garfield, graphic novels like City In The Desert and Beautiful Scars.
IDW have My Little Pony, Ghostbusters, TMNT, Samurai Jack, Powerpuff Girls and Popeye.

Bongo Comics have The Simpsons and Spongebob Squarepants.

Archie Comics continue to excel and sales for us of these comics have tripled in the last year.

PaperCutz have a continuing all ages output of which The Smurfs is the most prominent. Finally Kodansha and VIZ publish a large range of all ages Manga titles. They bring in customers who have watched the cartoons on television or the web.

To keep the adult reader interested the range continues to grow.

Image have a great stable of titles covering all genres by seasoned professionals and talented newcomers. They have now established a great back catalogue of graphic novels and are number two for us in sales of trades. DC are number one for trades at the moment.

For more cerebral output then Fantagraphics and Top Shelf continue to push the envelope and have many award winning titles and creators. This year from Top Shelf sees the next instalment of Alan Moore and Kevin O’Neill’s League stories, Nemo The Roses Of Berlin.

Cinebook continue to release English language editions of European best sellers like Iznogoud, The Scorpion, XIII, Pandora, Lucky Luke to name a few.
I finish with a boost for one of the top independent creators Terry Moore, whose current hit is Rachel Rising, up to #24 and going strong, maybe a TV series or movie in view.

All in all a strong field, more than enough to keep the growth continuing.

Marvel and DC may stumble but there are many to take up the baton should that ever happen. They should take a few moments out and look at what their competitors are doing and sharpen their acts up before a rot sets in that cannot be stopped.

Final observation is that when creators work for the bigger companies they are on a treadmill that can sap their creative spirits and not produce a large salary. Small independent creators such as Terry Moore can produce just one extremely well drawn and well written book a month and still create a healthy salary. They also benefit from the back market with trades of their previous work.

If you are feeling a change from the super hero market is what you need then check out Previews and the publishers I have mentioned above. It will not be a waste of time.