Planetoid, the brand new series from Image Comics by Ken Garing, is due in June and they’ve provided a heads-up on what to expect.

The story revolves around space smuggler Silas, who crash-lands on a living, metal planet.

“The world of Planetoid is that of a vast, abandoned industrial landscape,” said Garing. “The story, however, will revolve around the efforts of the planetoid’s inhabitants as they struggle together against extraordinary odds in the hope of building something new out of the devastation.” 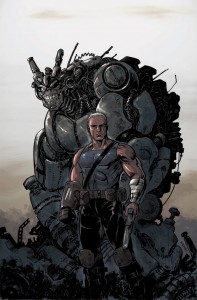 It seems Silas will have to join forces with the few other humans who have found themselves also stranded on the Planetoid in order to overcome the living planet’s own will to survive.

If you haven’t preordered it already, make sure you look out for it on the shelves in June.