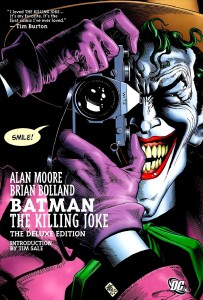 “Easily the greatest Joker story ever told, Batman: The Killing Joke is also one of Alan Moore’s finest works. If you’ve read it before, go back and read it again. You owe it to yourself.” — IGN.com

Alan Moore cemented his reputation for unparalleled storytelling with wildly acclaimed books such as Watchmen and V For Vendetta. Here he takes on some of DC’s most classic characters, offering his unforgettable version of the disturbing relationship between the Dark Knight and his greatest foe, the Joker.In this groundbreaking work, Moore creates a twisted tale of insanity and human perseverance. Looking to prove that any man can be pushed past his breaking point to madness, the Joker attempts to drive Commissioner Gordon insane. Refusing to give up, Gordon struggles to maintain his sanity with the help of Batman in a desperate effort to best the madman.