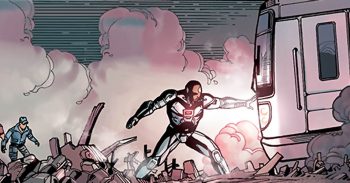 An ancient power rises to reclaim the universe itself and not even the Justice League can stop it! Betty and Veronica are America’s sweethearts – until they turn on each other! Enter the world of Snotgirl from Scott Pilgrim’s Bryan Lee O’Malley! Sgt. Kreel is back with an all-new squad of Stormtroopers in Star Wars! And Deadpool is a terrible team leader. Think we’re lying? Ask the Mercs For Money!