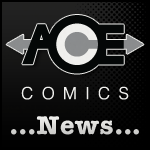 Much of the news round-up comes from C2E2 – the Chicago Comic & Entertainment Expo, which took place this weekend. Dark Horse have announced their plans to co-publish Athena Voltaire with Sequential Pulp Comics. Athena Voltaire is a 1930’s heroine originally launched as a part of the Modern Tales family of webcomics in 2002. The […]