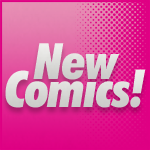 This week’s titles are due to hit shelves on Wednesday, 17th October. Featured in this week’s comics are the following… BPRD 1948 #1 Dark Horse The Nazi occult bureau threatened to destroy the peace that followed the end of World War II. One year after the war, Professor Bruttenholm, guardian of the child Hellboy, enlisted […]