Two haunted men are on a hunt in the jungles of Vietnam, searching for clues to a missing treasure trove of gold that was stolen from all over Asia by a Japanese general during World War II. Eventually they find a series of hidden caves in the mountains near the coast. Bodies start showing up-murder victims and mutilated corpses. There is a rumour that the caves and gold are protected by terrifying witches that have been living in the cave system for thousands of years. As our warriors travel deeper into the mystery, they learn more disturbing facts about each other and become paranoid of one another as they get closer and closer to the gold, while, at the same time, a bizarre serial killer is hunting them down.

The Horrors of War! 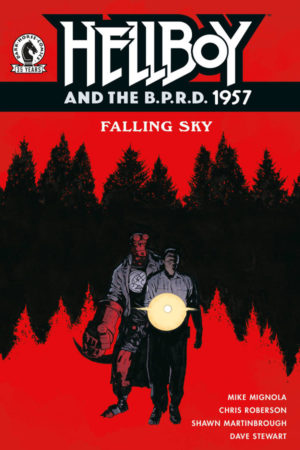 Cryptozoologist Woodrow “Woody” Ferrier joined the B.P.R.D. to find exciting and previously undocumented cryptids, but unfortunately most of his cases end in disappointment. But a trip with Hellboy to small town Virginia where a huge and mysterious creature stalks the woods might provide him with just the opportunity he’s been waiting for!

Hellboy creator Mike Mignola and long-time collaborator Chris Roberson gives us a new tale from the world of Hellboy. Featuring art by Shawn Martinbrough, colours by Dave Stewart, and letters by Clem Robins.

From the ancient warrior Gall Dennar, to Sir Edward Grey, to the B.P.R.D.’s Agent Howards, the iconic Hyperborean sword from the world of Hellboy has landed in many influential hands. And this has been no accident. Trace the sword’s path through the adventures and encounters that finally brought it to Ragna Rok, at the end of the world, and witness the sword’s journey through history.

Hellboy creator Mike Mignola gives us a new tale from the world of Hellboy, cowritten by Rob Williams and featuring the art of Mignolaverse veteran Laurence Campbell to deliver never-before-seen Hellboy lore!

The story of the Hyperborean blade!