There are some great series beginning in July, and we’ve added a prime selection to our 6-Issue Subscriptions list, including the new Nightwing-led espionage thriller Grayson and Rocket Raccoon, featuring the anticipated break-out star of this summer’s Guardians Of The Galaxy movie!

6-Issue Subscriptions are the easiest way to preorder your new comics. Just add the title to your basket, completed checkout and then the next six issues of your chosen comic will arrive regularly through the mail, bagged and boarded.

Take a look through our whole range of 6-Issue Subscriptions here. 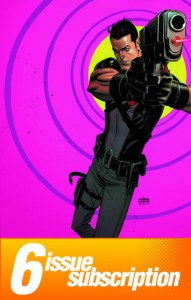 Dick Grayson. Former sidekick. Former Super Hero. Former dead man. And now…agent of Spyral?! A thrilling new chapter of Dick Grayson’s life begins in this new, ongoing series. It’s a super-spy thriller that will shock you and prove one thing: You might think you know Nightwing – but you don’t know Dick. 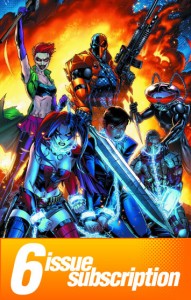 The world has changed for Task Force X, a.k.a. the Suicide Squad. Director Amanda Waller no longer has the autonomy she once had. New members disrupt the team dynamic. And the team takes on an international scope. New members Joker’s Daughter, Deathstroke and Black Manta join Harley Quinn and Deadshot for a mission in the most dangerous and unpredictable place in the world: Vladimir Putin’s Russia! 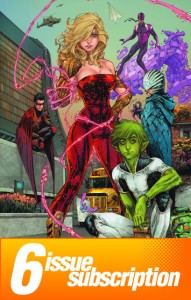 Red Robin, Wonder Girl, Raven, Bunker and Beast Boy step out of the shadows of the adult heroes of the DC Universe to offer bold, exciting and sometime dangerous ideas on how to protect a world full of superpowered teenagers – any one of whom could be the next heroic figure or major villain! 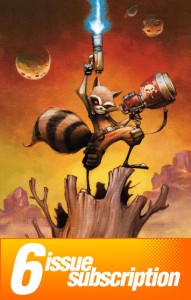 All-new, in-continuity series! As defenders of the cosmos go, Rocket Raccoon has faced his fair share of galactic battles. He’s been a hero to the weak, a champion of good, a protector of the innocent, a heartthrob to the many intergalactic female species and now–a raccoon on the run?! ( I’m sorry, I’m sorry, a “formidable-and-expert-Guardian” on the run. Rocket is NOT a raccoon, okay?) Rocket’s high-flying life of adventure and heroism may soon be a thing of the past when he becomes a wanted man-and the authorities are not the only one on his tail! (We’ll definitely be overusing that pun!). Superstar creator Skottie Young brings his A-game as writer and artist on the series we’ve been waiting decades for. Because let’s be real, this is the only Guardian of the Galaxy you actually care about. Am I right? 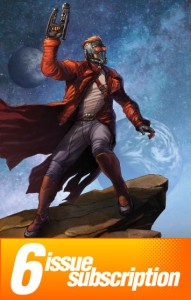 From the pages of Guardians Of the Galaxy! A brand new series from Sam Humphries and Paco Medina! In this exciting first issue, Peter Quill battles the Badoon, fights to save an orphanage, and still finds time for some flirting with Kitty Pryde–but it’s all in a day’s work for the Star Lord! 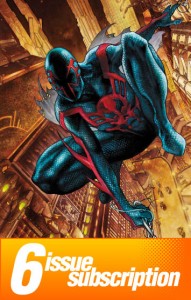 All-new series from the pages of Amazing Spider-Man! The book you have been demanding for months finally hits the stands! Miguel O’Hara is Spider-Man in the year 2099 but he’s currently stuck in the year 2014. He was stranded here by his father who is the head of an evil corporation called Alchemax in 2099. But in 2014, Alechmax has just been formed and Miguel has a chance to stop its corruption before it starts! You’d think being a man out of time would make you a man without enemies, but Spider-Man 2099 is about to discover that he’s not the only one hoping for a better tomorrow, one that might be ensured by The Adjustor eliminating Miguel from the time stream altogether! Join comics legend (and Spider-Man 2099 creator) Peter David and breakthrough artist Will Sliney (Superior Spider-Man Team-up) for the most adventure you’ll find in a book this side of the twenty second century! 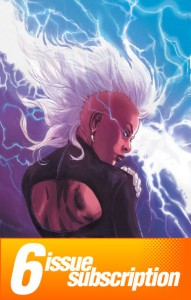 Thief. Goddess. Headmistress. Queen. The X-Man called Storm has always defied a single title. And her desire to better the world has never been limited to only her own kind. On a mission to foster goodwill and safeguard the mutant race’s continued existence in her own way, Storm will travel the globe, confronting man and mutant, god and monster and everything inbetween. She will overthrow tyrants, quell tsunamis and strive to see her dream for the world realized. She is Storm, a hero like no other….and the skies will tremble at the sight of their namesake.