“Coming out of Savage Six, Venom is looking down the barrel of a lot of changes,” said Bunn, “For the first time he’s making a conscious decision that he wants to be a hero. The problem is not a lot of people trust him and he doesn’t really trust himself. He’s on a short leash.

Flash is trying to grab onto a glimmer of hope moving forward, but he does have a habit of screwing things up. He’s working toward a brighter future, but it’s not going to be easy at all.” 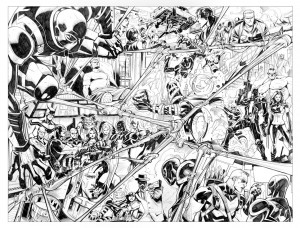 Editor Tom Brennan joined the guys on the liveblog: “With Flash as Venom, we’re seeing a guy learning to be a hero like Spider-Man far later in his life than Peter Parker did.”

Rick Remender: “Right now we’re dealing more with Flash than the symbiote, but that doesn’t mean he won’t ‘Hulk out’ at some point. I try to keep it rare and special.”

Cullen Bunn: “Flash is very worried about that happening again.”

Tom Brennan: “Flash is a better person than he was, but there’s still a violent bully in there somewhere.”