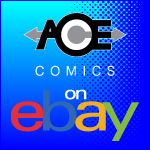 Angela is on her way to the Marvel Universe!

The character of Angela was co-reated by Neil Gaiman and Todd McFarlane and originally appeared as part of Image Comics‘ Spawn series. Following a long-running legal battle over the rights to the character which resolved in 2012, awarding Gaiman a 50% co-ownership, it’s been announced that the redesigned Angela is to make her debut Marvel appearance in the Age Of Ultron finale which will lead into a role in Guardians Of The Galaxy!

Make sure you don’t miss out on this exciting arrival – add ‘Guardians Of The Galaxy’ to either your Economics Subscriptions, your ACE Comics in-store customer reservations or sign up for the simple 6-Issue Subscription!

If you want to delve into the history of Angela, we have a selection of noteable back issues in our eBay store, including the Neil Gaiman 3-issue mini-series from 1994/5, with links to each one below: