The February Previews Order Form is now available online for you to download and view! 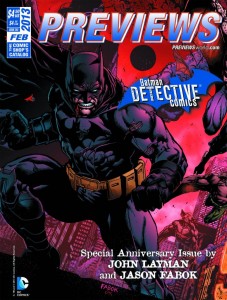 This month, Previews has highlighted a number of top items.

DC’s Detective Comics #19, on sale April 3rd, is to be an oversized issue and one of the special New 52 ‘WTF’ fold-out covers, each showcasing a WTF moment that is revealed on the fold-out page and will leave readers in a state of shock!

Also highlighted is the debut of Miss Fury by Rob Williams and Jack Herbert. The heroine is already a member of the Masks team and becomes the latest in a series of pulp heroes to get their own title from Dynamite following The Shadow, Green Hornet, The Lone Ranger and The Spider.

House Of Gold And Bones is a new offering from Dark Horse based on the albums of the same name from American alternative metal band Stone Sour. Written by frontman Corey Taylor, the book expands on the double concept albums, reaveling the full story behind the music.

The Marvel Previews section is promoting a new NOW! series – X-Men and well as Thanos Rising, a five-issue miniseries focussing on the demi-god of death in a tale that could change the very nature of the Marvel Universe.

The Toys and Models section features a whole host of goodies, from new Mini-mates based on Star Trek, The Walking Dead and The Marvel Universe, to new figures from Predator, Play Arts Kai (Batman: Arkham City and Medal Of Honor: Warfighter) and a very nice Aardman Batman and Robin 2-Pack (which seems to scream Only Fools And Horses to us!). Also highlighted is a great, Marvel Classic Character: X-Men #1 – Cyclops statue from Dark Horse, an LED light-up Iron Man 3 Mark VII Artfx statue from Kotobukiya and 1/4 scale Masterpiece Bruce Lee action figure from Enterbay.

In addition there are loads of great t-shirts, books, magazines, collectibles and novelites on offer.