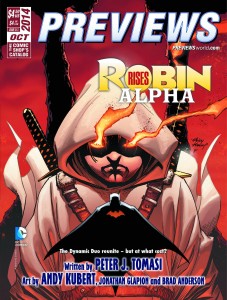 October’s Previews catalogue is now available to read through and we have a spreadsheet csv order form with UK prices that can be downloaded and filled in. There is a wealth of comics, books, magazines, clothing, toys, statues, games and more available. If you’re interested in getting hold of anything in the catalogue, just follow the steps… 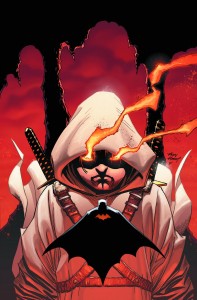 It all ends here! Batman’s been to the hells of Apokalips and back just to retrieve his son’s body. But what has he brought back with him? And who is the new Robin?

The mystical realm of Asgard has been rocked by the revelations of Original Sin — Thor Odinsson is no longer worthy to wield the enchanted hammer Mjolnir, a new and mysterious wielder carries the hammer as the new Thor, a tenth realm amongst the Nine Worlds has been revealed, and one of the greatest warriors of that tenth realm, Heven, is none other than Odin’s daughter and Thor’s sister — Angela! Spinning out of the pages of Guardians of the Galaxy and Original Sin, Angela graduates to a new ongoing series and embraces a new role in Angela: Asgard’s Assassin!

Angela had been trained from her infancy to be the finest warrior of Heven, believing herself to be Hevenborn and Asgard’s implacable enemy. But with the truth of her origins revealed in Original Sin, she has been cast from the realm that was her home and all she has known. Left to her own devices and struggling with the truth of her own identity, she must forge her own path. Unwanted by Heven and wanting nothing to do with Asgard, Angela soon discovers that, as an unaffiliated player on the cosmic stage, her unique talents for the hunt and the kill will be sought after and put to use quite unofficially!

Kieron Gillen returns to the cosmic realm of Asgard with cowriter Marguerite Bennett and artists Phil Jimenez and Stephanie Hans for Angela: Asgard’s Assassin. Gillen and Bennett chronicle the development of a troubled character as she finds her place in the Marvel Universe, discovers the characters fans have known for years and sees them through new eyes, and comes to grips with her heritage. Jimenez and Hans split the art duties, with Jimenez illustrating Angela in the world of reality and Hans illustrating Angela in the world of myth. The result is a comic that is both grounded and mythic, making Angela: Asgard’s Assassin one of the most unique super-hero comics on the market!

Angela’s journey of self-discovery through the Marvel Universe begins this December in Angela: Asgard’s Assassin! Join her!

Mike Mignola’s Hellboy is celebrating twenty years of publication, and Dark Horse Comics caps off the year with Hellboy and the B.P.R.D., a new mini-series that teams Mignola and Alex Maleev and reveals the story behind Hellboy’s first mission for the B.P.R.D.!

A series of mysterious murders in a Brazilian village catches the attention of Professor Trevor Bruttenholm and prompts him to dispatch the B.P.R.D. team – as well as his adopted son, Hellboy – to investigate. There, Hellboy will gain his first experience in field work, uncover sinister secrets in the shadow of a 16th-century fortress from the Age of Colonization, and begin the path toward becoming the World’s Greatest Paranormal Detective!

Mignola and cowriter John Arcudi are joined by Alex Maleev for a dark, moody, and essential chapter in the Hellboy mythos – Hellboy and the B.P.R.D.!

Captain Kirk and the crew of the Enterprise have encountered many strange worlds and civilizations in course of their five-year mission. Perhaps nothing could have prepared them for the discovery OF an alternate earth – an Earth dominated by intelligent apes after the collapse of human civilization. With the Klingons causing trouble, and time-lost astronaut Colonel George Taylor fighting back against Earth’s ape overlords, Captain Kirk and his crew must decide how the Primate Directive affects this mission!

Star Trek / Planet of the Apes: The Primate Directive is written by Star Trek / Doctor Who: Assimilation 2 writers Scott and David Tipton and features artwork from newcomer Rachael Scott along with covers from Juan Ortiz and George Perez. Star Trek and Planet of the Apes are both nearing their ﬁftieth anniversaries, and now they combine for the most unexpected mission of the starship Enterprise yet!

Five women are sentenced to the toughest prison in the universe. Four of them are guilty as sin. One should never have been convicted. Now, they’re inmates with a single goal — escape from the all-women penal planet — in the new series from Kelly Sue DeConnick, Image Comics’ Bitch Planet!

DeConnick wanted to explore the “Women In Prison” exploitation storytelling trope, and teamed with artist Valentine De Landro, she promises a campy and kick-ass sci-fi series. The five women concoct a plan – they will best five visiting male prisoners as part of a gladiatorial exhibition — but will they pull it off?