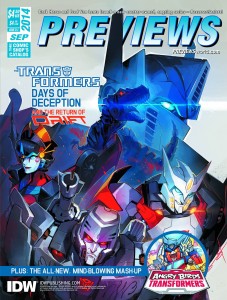 September’s Previews catalogue is now available to read through and we have a spreadsheet csv order form with UK prices that can be downloaded and filled in. There is a wealth of comics, books, magazines, clothing, toys, statues, games and more available. If you’re interested in getting hold of anything in the catalogue, just follow the steps…

Please note the cut-off date for placing orders from Previews #312 is 26th September 2014..

Drift returns! Last year, Transformers readers were shocked when Drift left the Autobots in disgrace… and now he’s alone, on a mission to clean up the darkest depths of the galaxy-until Ratchet shows up to try to bring him home!

Please welcome the new superstar creative team of writer Meredith Finch and artist David Finch! As this new epic begins, the fate of the Amazons is about to be revealed, major new characters will be introduced and a new villain will arrive with enough power to defeat the combined might of Wonder Woman and her Justice League teammates! Don’t miss the start of this story that guest stars Swamp Thing! It will define what it takes for Diana to fulfill her destiny as Wonder Woman!

Michael Moreci (Curse, Hoax Hunters) and Dan McDaid (Mind The Gap) bring the hardworld of Dawn of the Planet of the Apes to life – dealing with both classic and modern POTA questions of what the true meaning of “society” is, and if being “civilized” is even possible in a world wracked with strife. Great for fans of endstories like Twelve Monkeys, The Road, and Children Of Men.

Bridging the gap between the Rise Of the Planet Of The Apes and Dawn Of the Planet Of The Apes films, fans will bear witness to the fall of humanity and the rise of Caesar’s civilization. While the apes of the world have yet to advance as a species, Caesar must find a way to unify them to one cause. On the other side of the country, Malcom must venture into the decaying Americas with his family to find a cure for the plague slowly killing his wife, Rita. World powers will shift as civilizations collapse and rise.

Tony Stark has always known he is one of the Marvel Universe’s smartest humans. The CEO of Stark Industries, he holds a portfolio of patents worth billions, many of them developed as he designed and refined his Iron Man armor over the years. Life and experience tempered Tony’s arrogant certitude of his gifts, until recent events have transformed Tony Stark into a man without an ounce of humility. Now, he has a gift for humanity, a gift that humanity will take whether it wants it or not, in Tom Taylor and Yildiray Cinar’s new series for Marvel Comics, Supenor Iron Man.!

Arising from events in Avengers And X-Men: Axis, Tony Stark has relocated to San Francisco, and the City by the Bay will become the testing ground for his experiment in creating a technological utopia. If the human body poses an engineering problem of design and disease, Stark will reengineer it to be stronger and sturdier. The city’s populace is given access to Stark’s Extremis technology. and soon their bodies will be upgraded to make them smarter, faster, hardier, more resilient, more perfect. Creating a post-human population in one of America’s major cities will not come easily, and Tony Stark will soon find himself and his plans in conflict with an unexpected opponent – Daredevil!

But San Francisco is not the only thing changed by Stark’s project. Stark himself has a new attitude. He knows that he has humanity’s best interests at heart, and even more he knows that he can push himself to his limits and beyond. He is determined to make himself into a better Iron Man, a superior Iron Man. And woe to anyone who stands in his way!

Writer Tom Taylor and artist Yildiray Cinar join forces for this new chapter in Tony Stark’s life. Iron Man is relaunched with a new setting, new challenges, and a new attitude for the Avengers NOW! in October’s Superior Iron Man!