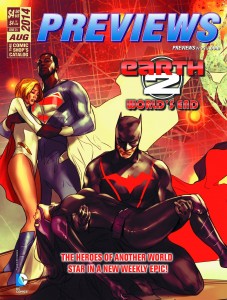 August’s Previews catalogue is now available to read through and we have a spreadsheet csv order form with UK prices for you to download and fill in. There is a wealth of comics, books, magazines, clothing, toys, statues, games and more available. If you’re interested in getting hold of anything in the catalogue, just follow the steps…

Daniel H. Wilson, New York Times best-selling author of Robopocalypse and Robogenesis, delves into the world of Earth 2 for the start of a new weekly series that will see the origins of a world much like the New 52 Earth, but yet so different. A world that saw its greatest heroes die – and new ones take their places. A world where Superman became it’ greatest villain, and a man named Zod seeks to save it, along with Batman, Green Lantern, The Flash and other heroes. A world they can only save from the forces of Apokolips through great personal sacrifice! Death and destruction will follow each week, and you’ll never know who will live and who will die! It all begins with this extra-sized debut issue!

In his effort to stop Cyclops and the Phoenix Five from destroying the world during the events of Avengers Vs. X-Men, Charles Xavier lost his life. Xavier’s body, unfortunately, did not receive a respectful burial; instead, it fell into the hands of the Red Skull who removed Xavier’s brain and performed unholy experiments upon it to control the immense telepathic powers Xavier wielded. Now, with his schemes at fruition and his mastery of Xavier’s mind complete, the Red Skull unleashes hell on the Marvel Universe in October’s Avengers And X-Men: Axis #1 — and even the combined powers of the Avengers and the X-Men may be powerless to stop him!

With the power of Xavier’s mind, the Red Skull has become the Red Onslaught, and he has utilized Xavier’s telepathic powers to incite humanity to hatred and ruin, triggering World War Hate. With humanity tearing itself apart, the Avengers have lost one of their own — Iron Man — when he makes a discovery that upends his own life, while Magneto’s mission to protect mutantkind at all costs has had grave consequences as he unwittingly unleashes a terrible evil upon the world. Only the combined power of the Avengers and X-Men can stem the chaos, yet the fate of the world will fall to only two — Rogue and the Scarlet Witch!

The culmination of years-long story arcs, Avengers And X-Men: Axis from Rick Remender and artists Andy Kubert, Leinil Francis Yu, Terry Dodson, and Jim Cheung draws on plotlines from Avengers Vs. X-Men and Uncanny Avengers to craft a series that shows the Marvel Universe’s darkest hour. Civilization teeters on the brink, heroes are rendered powerless to cope with the encroaching darkness, and what hope remains falls upon a few. Could this be the hour when the heroes fall and evil triumphs?

The Marvel Universe faces its darkest chapter in Avengers And X-Men: Axis #1, and the Marvel Universe will be reeling from its effects for years to come. Get in on the ground floor with the first issue from Remender and Kubert this October!

Nearly twenty-five years have passed since Johnny Depp’s star-making turn as the titular character in Tim Burton’s enchanting fairy tale for adults, Edward Scissorhands. This October, IDW Publishing returns to the world of the film with the new Edward Scissorhands mini-series!

Two generations have passed since Edward left his inventor’s gothic castle and met the family that took him in for a brief time. The young woman he loved, Kim, grew old, and she told her granddaughter stories of the man with scissors for hands who lived in the castle above the town. Meanwhile, Edward has explored the castle where he was created, and he discovers that he was not the Inventor’s only creation. Soon, the granddaughter of Kim will come face to face with a strange man that she believed was only a story in her grandmother’s imagination!

Mankind has always feared the dark, whether it is the night when the sun has gone down or the shadows in a Poorly lit room. Instinctively, we feel that something lurks there, something unseen, something dangerous, something deadly. We have our folklore and our legends telling us about the things that lurk in the dark, telling us not to go there. And mankind has long punished those who go out in the dark. We’ve called them “witches”. We’ve tortured them and burned them, just because they weren’t afraid of the dark.

We shouldn’t have. Because there are things far worse out there in the shadows, and the “witches” are nothing more than people like you and me, albeit people more comfortable with the dark and the things that hide in the shadows.

This October, Batman’s Scott Snyder reteams with Jock, his artist from Batman: The Black Mirror for a new supernatural series about the dark and the people who have served and protected the dark – Wytches. Launching with a 30-page first issue, Wytches is guaranteed to be the horror comic of the autumn, a time when the shadows grow, the dark encroaches, and the things in the dark come out.

A time of Wytches.

The loss of the Prometheus on LV-223 has drawn others to the mysterious planet, among them the mercenary ship Perses. In Alien Vs. Predator: Fire and Stone by Christopher Sebela and Ariel Olivetti, the crew of the Perses discovers that there are greater dangers than an inhospitable world; they quickly find themselves in the midst of an ancient conflict between the Aliens and the Predators!

The crew of the Perses is not done with these extraterrestrial horrors, however! Soon they are the prey themselves in Joshua Williamson and Chris Mooneyham’s Predator: Fire and Stone. The Perses becomes fertile hunting ground when a Predator stows away aboard the Perses as it embarks on it’s arduous journey home!

Drawing on elements of all four film franchises and drawing them together, the individual mini-series can be read individually for a satisfying experience or read together for one massive epic of science-fiction horror! Look for the two newest series in this month’s Previews and in your local comic shop this October!