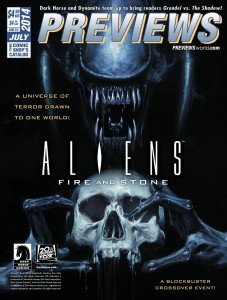 July’s Previews catalogue is now available to read through and we have a spreadsheet csv order form with UK prices for you to download and fill in!. There is a wealth of comics, books, magazines, clothing, toys, statues, games and more available. If you’re interested in getting hold of anything in the catalogue, just follow the steps…

During a vicious xenomorph outbreak, terraforming engineer Derrick Russell leads a desperate group of survivors onto a rickety mining vessel. They hope to escape the creatures overrunning their colony-but they’ll face horrors both in space and on the strange planet they crash on. Ties in with the Prometheus and Aliens films!

It’s the beginning of the end – “Three Months To Die” ends here!

The beginning of the end is now here … the death of Wolverine! “Three Months To Die”, the loss of Wolverine’s healing factor–all led to this, the single most important X-Men event of the decade. Logan has spent over a century being the best there is at what he does… but even the best fade away eventually. Over the years, Logan has been a warrior, a hero, a renegade, a samurai, a teacher-and so much more. But now, the greatest X-Men hero will play a role he’s never played before in this special weekly event brought to you by industry superstars Charles Soule and Steve McNiven.

“Our destiny is in the stars, and I will lead us there.”

Twenty years after this promise, billionaire Langford Skaargard’s dream of cosmic exploration is no more. Roche Limit, a colony situated on the cusp of a mysterious energy anomaly, is a melting pot of crime and terrible secrets. When Bekkah Hudson goes missing, the search to find her will plunge her sister and a cadre of the colony’s underworld figures into an odyssey that reveals a grim future for mankind. Blending 2001: A Space Odyssey with Blade Runner, Roche Limit is the first part of a bold sci-fi/noir trilogy.

New ongoing series! Terror is born anew in this dark reimagining of Sabrina the Teenage Witch’s origin. On the eve of her sixteenth birthday, the young sorceress finds herself at a crossroads, having to choose between an unearthly destiny and her mortal boyfriend, Harvey. But a foe from her family’s past has arrived in Greendale, Madame Satan, and she has her own deadly agenda. Archie Comic’s latest horror sensation starts here!

The X-Files’ Joe Harris takes on The Prince of Darkness – Alice Cooper in his FIRST ongoing comic series! Rock n’ roll legend Alice Cooper was never a stranger to the mystic and the macabre. His stage shows were the stuff of legend, featuring snakes and pyrotechnics and the invocation of dark themes and darker forces. But while he was a legend in the waking world, few knew his role as “The Lord of Nightmares” beyond it, where he watched over us while we dreamed, and delivered horrors unto the deserving. Only someone took it all away from him, cast him out of his realm and locked him away… until now. And if he’s going to reclaim his dark throne, he’s going to need all the help he can get!