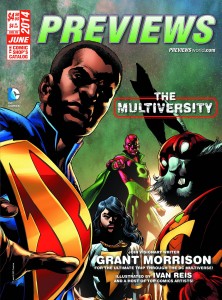 June’s Previews catalogue is now available to read through and we have a spreadsheet csv order form with UK prices for you to download and fill in!. There is a wealth of comics, books, magazines, clothing, toys, statues, games and more available. If you’re interested in getting hold of anything in the catalogue, just follow the steps…

The biggest adventure in DC’s history is here!

Join visionary writer Grant Morrison, today’s most talented artists, and a cast of unforgettable characters from 52 alternative Earths of the known DC Multiverse! Prepare to meet the Vampire League of Earth-43, the Justice Riders of Earth-18, Superdemon, Doc Fate, the super-sons of Superman and Batman, the rampaging Retaliators of Earth-8, the Atomic Knights of Justice, Dino-Cop, Sister Miracle, Lady Quark, the legion of Sivanas, the Nazi New Reichsmen of Earth-10 and the latest, greatest Super Hero of Earth-Prime: you!
Comprising six complete adventures – each set in a different parallel universe – plus a two-part framing story and a comprehensive guidebook to the many worlds of the Multiverse, The Multiversity is more than just a multipart comic-book series. It’s a cosmos spanning, soul-shaking experience that puts you on the frontline in the Battle for All Creation against the demonic destroyers known as the Gentry!

In issue #1, penciled by superstar artist Ivan Reis (Aquaman, Justice League), President Superman of Earth-23 uncovers a threat to all Reality so apocalyptic it will take a team of incredible heroes from across the Multiverse to face it – including Captain Carrot, like you’ve never seen him before!

But even with a multitude of alternate worlds to choose from, where every variation is possible, can anyone hope to prevail against the onslaught of ultimate evil and undying hatred – in the unstoppable form of a one-time cosmic defender with unimaginable powers?! Join us, if you dare, for the beginning of The Multiversity!

It’s been two years since the Master’s plan succeeded and a near apocalypse coated the world in darkness. Now able to roam freely, the Master’s legion of vampires rule the world-a horrifying police state where humans are harvested for blood. As humanity despairs, Dr. Ephraim Goodweather and an unlikely team of heroes continue their fight against extinction and hope to unlock the secret to the Master’s demise.

Ed Brubaker and Sean Phillips have established themselves as modern practioners of the crime comic, first with Criminal for Marvel’s Icon imprint and again with Image Comics’ Fatale. This August they return to Image with a new crime series, The Fade Out, that promises to break new creative ground.

Hollywood in the 1940s was a playground of moguls and starlets, a city of secrets, a city of dreams. Beneath the veneer of opulence and the flash of camera bulbs, writers were haunted by nightmares, starlets had secrets that could ruin the powerful, and the powerful were determined to keep the good times rolling. In the days after the end of the war, these combine in a powerful and toxic brew. Some people will pay the price for their hubris, no secret stays buried forever, and some parties are doomed to end.

Brubaker and Phillips signed a five-year deal with Image, with The Fade Out as their first book in the line. It’s a heady brew of crime and corruption, and no fan of their work will want to miss it.

Kazu Kibuishi (Copper, Daisy Cutter) is back with the newest installment of the New York Times bestselling graphic novel series: Amulet! After discovering a mysterious necklace in the library of her great-grandfather, Emily and her brother Navin are thrust into a quest to save their mother from a nasty tentacle monster that invades the basement of their new home and kidnaps her. In pursuit of the creature, Emily and Navin follow the monster into a fantastical alternate reality populated with talking animals, robots, demons, and humans who are locked a war with the Elves.

Now the stakes are raised as the war with the Elves heats up even more. Emily and Navin travel to Lucian. The city has been decimated in the conflict leaving it nothing but rubble. Casualties within the city are undoubtedly high. Will the two manage to make it out of the city alive with all of their friends more or less intact or will they fall prey to military might of the Elf King? 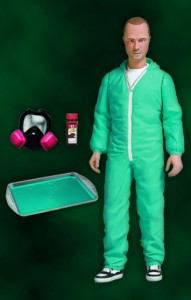 From Mezco Toys. This much anticipated figure features Jesse in a Previews Exclusive blue version of his hazmat suit, based on the one seen in numerous episodes from the award-winning series Breaking Bad. Jesse stands 6″ tall and comes complete with a gas mask, chili powder and a tray of blue crystal. The whole set is discreetly packaged on a collector-friendly blister card.