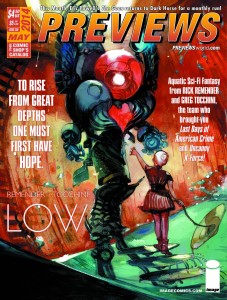 May’s Previews catalogue is now available to read through and we have a spreadsheet csv order form with UK prices for you to download and fill in!. There is a wealth of comics, books, magazines, clothing, toys, statues, games and more available. If you’re interested in getting hold of anything in the catalogue, just follow the steps…

In the far distant future, the sun’s premature expansion has irradiated Earth, sending humanity to the lowest depths of the seas, hidden within radiation-shielded cities, while probes scour the universe for inhabitable worlds to relocate to. After tens of thousands of years, a single probe returns, crashing on Earth’s surface, a now-alien place no human has seen for many millennia.

A thrilling new chapter of Dick Grayson’s life begins in this new, ongoing series. It’s a super-spy thriller that will shock you and prove one thing: You might think you know Nightwing – but you don’t know Dick.

All-new, in-continuity series! As defenders of the cosmos go, Rocket Raccoon has faced his fair share of galactic battles. He’s been a hero to the weak, a champion of good, a protector of the innocent, a heartthrob to the many intergalactic female species and now–a raccoon on the run?! ( I’m sorry, I’m sorry, a “formidable-and-expert-Guardian” on the run. Rocket is NOT a raccoon, okay?) Rocket’s high-flying life of adventure and heroism may soon be a thing of the past when he becomes a wanted man-and the authorities are not the only one on his tail! (We’ll definitely be overusing that pun!).

Superstar creator Skottie Young brings his A-game as writer and artist on the series we’ve been waiting decades for. Because let’s be real, this is the only Guardian of the Galaxy you actually care about. Am I right? 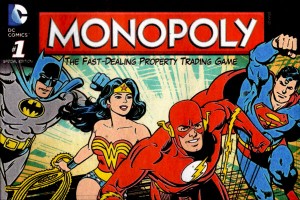 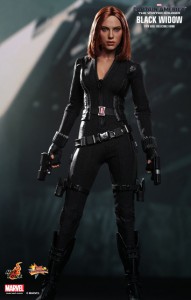 One of S.H.I.E.L.D.’s greatest female spies, Black Widow, is back in action with Captain America in ‘Captain America: The Winter Soldier’! Hot Toys presents the Black Widow 1/6 Scale Collectible Figure. The movie-accurate collectible is specially crafted based on the image of Scarlett Johansson as Black Widow in the film. Featuring a newly developed head sculpt with straight brownish-red real fabric hair, newly designed costume made with multiple materials, detailed weapons and accessories, you won’t want to miss the chance to add this spy to your shelves!