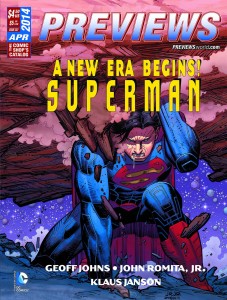 April’s Previews catalogue is now available to read through and we have a spreadsheet csv order form with UK prices for you to download and fill in!. There is a wealth of comics, books, magazines, clothing, toys, statues, games and more available. If you’re interested in getting hold of anything in the catalogue, just follow the steps…

“The Man Of Tomorrow” Chapter 1! A new era for Superman begins as Geoff Johns takes the reigns – and he’s joined by the legendary super-talent of John Romita, Jr. in his first-ever work for DC Comics as they introduce Ulysses, the Man of Tomorrow, into the Man of Steel’s life. This strange visitor shares many of Kal-El’s experiences, including having been rocketed from a world with no future. Prepare yourself for a run full of new heroes, new villains and new mysteries! Plus, Perry White offers Clark a chance to return to The Daily Planet!

For the first time ever, a visual presentation of the much-discussed, unrevised, unadulterated version of Harlan Ellison’s award-winning Star Trek teleplay script, “The City on the Edge of Forever!” This Hugo- and Writer’s Guild of America Award-winning teleplay has been much discussed for decades but only here can you see the story as Mr. Ellison originally intended!

Kyle Barnes has been plagued by demonic possession all his life and now he needs answers. Unfortunately, what he uncovers along the way could bring about the end of life on Earth as we know it.

Answers at all costs. In the wake of last issue’s explosion of secrets, the heroes of the Marvel U are reeling, leaving Nick Fury to stand alone. He Who Holds the Eye is still on the run, and now we meet his boss, the villainous mastermind behind the raid on the Watcher’s lair. And in deep space, the Winter Soldier leads a team that uncovers the most bizarre murder of all. 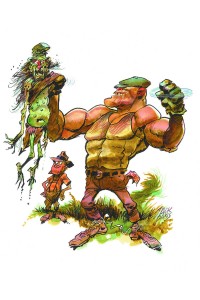 Goon and Franky meet a sailor on the hunt for his buddy… but trouble ensues when the trio go bar to bar in genre-hopping pursuit.

Created by Eisner-award winner Eric Powell with the cover by one of the greatest humor cartoonists of all time, Jack Davis!