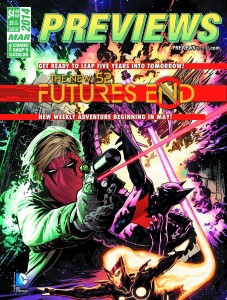 March’s Previews catalogue is now available to read through and we have a spreadsheet csv order form with UK prices for you to download and fill in!. There is a wealth of comics, books, magazines, clothing, toys, statues, games and more available. If you’re interested in getting hold of anything in the catalogue, just follow the steps…

Five years from now, the DC Universe is reeling from a war with another Earth, leaving the world unprepared for an approaching evil that threatens to destroy the future. Can a time-traveling Batman Beyond help a massive cast of the DCU’s finest avert the impending apocalypse? Find out in this new weekly series that will forever alter the direction of The New 52! In this debut issue of The New 52’s weekly series, Batman Beyond arrives five years later! Grifter turns against humanity! And a Justice League member dies!

Ten years after they landed. All over the world. And they did nothing, standing on the surface of the Earth like trees, exerting their silent pressure on the world, as if there were no-one here and nothing under foot. Ten years since we learned that there is intelligent life in the universe, but that they did not recognize us as intelligent or alive. Beginning a new science fiction graphic novel by Warren Ellis and Jason Howard.

Who shot The Watcher?

The Watcher, the mysterious space-god who’s been watching us from the moon for as long as we can remember… is dead. Thus begins the greatest murder mystery in Marvel Comics history.

As Nick Fury leads the heroes of the Marvel Universe in an investigation, other forces are marshaling as well and other questions are arising. Why is Black Panther gathering a secret team of his own, including Emma Frost, the Punisher and Dr. Strange? Who is the Unseen? What was the Original Sin? What was stolen from the Watcher’s lair? And most importantly, who now holds the Marvel Universe’s darkest secrets in the palm of their hand?

Getting cut in half by Obi-Wan Kenobi and being rejected by his former Sith master Darth Sidious isn’t going to defeat Darth Maul. In fact, it only makes him mad enough to take on the galaxy-with an army of Mandalorians!

A part of The Clone Wars season 6 you never saw!

Part One of the biggest Spider-Man story of the year “Revival”!

Miles is back in action with a new status quo and a new outlook on life! A big, big, big villain from Peter Parker’s past is alive and well and about to turn New York upside down! The last page will have Ultimate Spider-Man fans screaming! This issue can’t be missed!