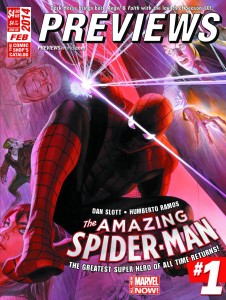 February’s Previews catalogue is now available to read through and we have a spreadsheet csv order form with UK prices for you to download and fill in!. There is a wealth of comics, books, magazines, clothing, toys, statues, games and more available. If you’re interested in getting hold of anything in the catalogue, just follow the steps…

Please note the cut-off date for placing orders from Previews #305 is 28th February 2014..

The Greatest Super Hero of All Time returns! The world may have changed since Spidey’s been gone, but so has Peter Parker. This is a man with a second chance at life, and he’s not wasting a moment of it. Same Parker Luck, new Parker attitude. Putting the “friendly” back in the neighborhood, the “hero” back into “super hero,” and the “amazing” back into “Spider-Man!” Also returning: The recharged and re-energized Electro!

Don’t dare miss the start of the Bat-story so big it’s going to take every week of the month to tell! A massive cast of Gotham City’s best (and worst) examines the relationship between Batman, his allies and his city. In this debut issue, Commissioner James Gordon is caught on the wrong side of the law!

When a sniper’s bullet kills the pro-peace Speaker of the House and a terrorist vampire cell takes credit, the Vampire War erupts hotter and bloodier than ever. Join IDW and New York Times best-selling author, Jonathan Maberry, as we take you on a non-stop thrill ride of action, horror and suspense! Welcome to the V-Wars!

A young Rebel meets one of the Alliance’s best for his first mission. But the young man’s hero worship is crushed by the reality of Han Solo. A botched escape, a ship that doesn’t work-could it be that Solo is just a lucky bumbler whose luck has run out?

All-new direction! The epic “Banner D.O.A.” begins NOW!!! Following the shocking events of last month’s Indestructible Hulk finale, Bruce Banner lies at death’s door! If he survives, it won’t be as the Bruce Banner we’ve known! How will the Hulk wreak vengeance on Banner’s assailant? How can he?

Walk down the right back alley in Sin City and you can find anything, but you don’t need to live in Sin City to get high-quality Select action figures of the movie’s main cast! The first series of 7-inch-scale, fully poseable figures from DST includes Marv, Hartigan and Nancy, all based on their appearances in the 2005 feature film. Each figure comes packaged with a deluxe display base and accessories in the famous Select display packaging, complete with spine reference artwork. Sculpted by Jean St. Jean!