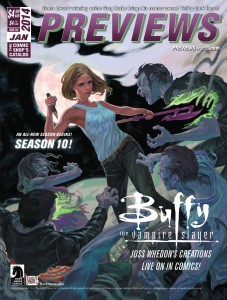 January’s Previews catalogue is now available to read through and we have a spreadsheet csv order form with UK prices for you to download and fill in!. There is a wealth of comics, books, magazines, clothing, toys, statues, games and more available. If you’re interested in getting hold of anything in the catalogue, just follow the steps…

Previews’ recommendations are listed below. If we have the item available in our online shop you’ll be able to add it to your basket using the relevant buttons…

New season. New rules. The age-old battle of Slayer vs. vampire is the focus of Buffy’s life once again-it’s downright nostalgic! But with all the toying with magic she’s done lately, this girl should know it’s time for another game change . . . Shouldn’t she?

Next month, Angel And Faith returns!

Forty years ago, Duke McQueen was the space hero who saved the universe. But then he came back home, got married, had kids and grew old. Now his children have left and his wife has passed away, leaving him alone with nothing except his memories… until a call comes from a distant world asking him back for his final and greatest adventure. This issue launches the much-anticipated Millarworld Universe. Get in on the start of something MASSIVE!

Join Marvel’s fearless hero as he begins his most awe-inspiring adventure yet in the sunny city of San Francisco! Gifted with an imperceptible radar sense and a passion for justice, blind lawyer Matt Murdock – a.k.a. Daredevil – protects the Golden City’s streets from all manner of evil. But big changes are in store for Matt Murdock as old haunts and familiar faces rise to give the devil his due. Hold on tight, because here comes Daredevil…the Man Without Fear!

A beautiful girl wakes up in an abandoned subway station with no memory of how she got there. When men try to hurt her . . . they wind up dead. Where did she come from? And what is she capable of?

A surprising new heroine from the creator of Lazarus and Queen and Country!

One of the most acclaimed crime series ever returns! When Gary Goldsmith and his young son Asa are involved in a deadly hit and run, their night goes from bad to worse when their grisly deed is witnessed by a disturbing stranger. Find out what thirty dollars, a dirty diaper, and a girl named Yummy will reveal about the true meaning of life in a little story we like to call “The Love Ride.” Featuring the return of Spanish Scott!

This new arc of stories about life and love and all the things we do to kill them starts out in the best noir tradition, then turns the genre on its ear. Would you expect any less? If you’ve never read STRAY BULLETS before, jump in here. Hell, jump in anywhere. Every issue always presents a complete story that fits into a larger whole. 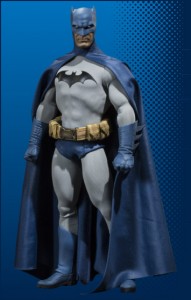 Inspired by a number of timeless comic book appearances, the Batman 1/6-Scale Figure invites collectors to further define their favorite look for the Dark Knight with short and long-eared mask options, and two no-nonsense facial expressions able to strike fear into the hearts of his enemies. Equipped with a variety of hi-tech ‘Bat’-prefixed gadgets, utility belt and grapple hook gun, the Caped Crusader is always one step ahead of his foes… and for times of true crisis he keeps a powerful gift from his closest friend nearby in the form of a green Kryptonite ring. This is the ultimate must-have for fans of the hero, the legend, the Batman!