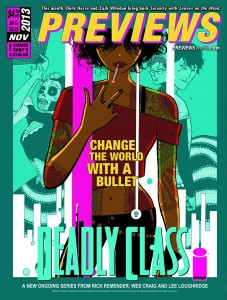 November’s Previews Order Form is now available to read through and we have a spreadsheet csv order form with UK prices for you to download and fill in!

Then download the order form (ACE Order Form no.463). 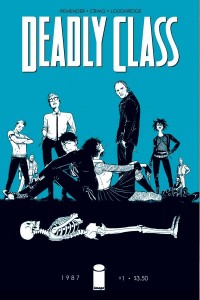 It’s 1987. Marcus Lopez hates school. His grades suck. He has no money. The jocks are hassling his friends. He can’t focus in class, thanks to his mind constantly drifting to the stunning girl in the front row and the Dag Nasty show he has tickets to. But the jocks are the children of Joseph Stalin’s top assassin, the teachers are members of an ancient league of assassins, the class he’s failing is “Dismemberment 101,” and his crush, a member of the most notorious crime syndicate in Japan, has a double-digit body count.

Welcome to the most brutal high school on Earth, where the world’s top crime families send the next generation of assassins to be trained. Murder is an art. Killing is a craft. At King’s Dominion High School for the Deadly Arts, the dagger in your back isn’t always metaphorical, nor is your fellow classmates’ poison.

Join writer Rick Remender with rising star Wesley Craig (Batman) and legendary colorist Lee Loughridge (Fear Agent) to reminisce about the mid-1980’s underground through the eyes of the most damaged and dangerous teenagers on Earth.

Zack Whedon and Georges Jeanty continue the story of Mal Reynolds and the crew of the Serenity in this all-new limited series set in the aftermath of the Serenity theatrical film!

Malcolm Reynolds’s crew shook the ‘verse to its core when they laid bare the crimes against humanity undertaken by their sinister government-the Alliance. Always outlaws, Mal, a very pregnant Zoe, new pilot River Tam, and the other surviving crew members are in greater danger than ever. Meanwhile, everyone is asking the same question… 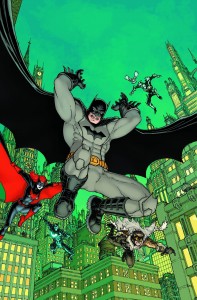 DC Entertainment presents this mega-sized issue featuring an all-star roster of Batman creators past and present!

Also in this issue, John Layman and Jason Fabok kick off the new storyline “Gothtopia”! It’s a bright, shiny, happy place where dreams come true… as long as you don’t look at things too closely. 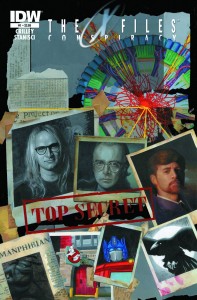 The event of the year begins here! When The Lone Gunmen discover Internet files from future, they learn that a plague will soon wipe out most of humanity. With Agents Mulder and Scully working one lead, the Gunmen must spring into action and investigate several urban legends: a group of ghost-hunters, mutant turtles that live in the sewers, shape-changing alien robots, and a vengeful spirit from beyond the grave! 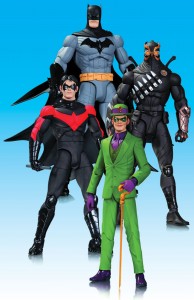 Based on the designs from the best-selling artist of Batman, Greg Capullo, comes the first wave in an all-new Designer Series from DC Collectibles.

Greg Capullo quickly established himself as one of the defining Batman artists with 2011’s Batman #1, and this spring his unique and moody interpretations of Gotham City’s heroes and villains are yours to collect with the first wave of the DC Comics Designer Action Figures! Four figures — Batman, Nightwing, a Talon, and The Riddler — are adapted from Capullo’s artwork and given three-dimensional form by DC Collectibles, making these 6 3/4″ tall figures some of the most detailed, most articulated, and most dynamic Batman figures on the market!

Please note the cut-off date for placing orders from Previews #302 is 29th November 2013.