The critically acclaimed, best-selling series ‘The Sandman’ returns this October as author Neil Gaiman returns to the realm of the Endless with ‘The Sandman: Overture’.

As Gaiman explains, the book will revolve around an untold tale in the Sandman mythos: “This is the one story that we never got to tell. In Sandman #1 Morpheus is captured somehow. Later on in the series, you learn he was returning from somewhere far, far away – but we never got to the story of what he was doing and what had happened. This is our chance to tell that story, and J.H. Williams III is drawing it. It’s the most beautiful thing in the world.”

J.H. Williams III (Batwoman, Promethea) will be providing the art and each issue will feature covers by both Williams and original series cover artist Dave McKean. The Sandman: Overture will be published bi-monthly with an oversized issue #1 featuring a spectacular interior gatefold arriving on October 30th, 2013.

One of the most popular, groundbreaking, bestselling and award-winning comic books of the last twenty-five years, Gaiman’s The Sandman stands tall as one of the few graphic novel series ever to be on the The New York Times Best Seller list and lauded by critics the world over for its transformative storytelling in the comic book industry.

For a limited time, we are offering all six issues of The Sandman: Overture as a 6-Issue Subscription, so make sure you don’t miss out and add it to your cart today! 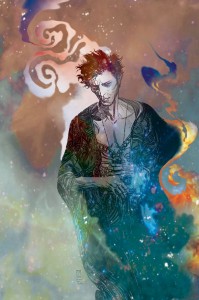 “People have often asked me what happened to Morpheus to make it possible for him to be captured in THE SANDMAN #1,” Gaiman said. “And now they get to find out. And finding out, they get to learn secrets of the Endless that I’ve kept to myself for 25 years. Family secrets. And I should warn you: one of the Endless dies on page five.”

Hit the button to be taken to our 6-Issue Subscriptions page and place your order!