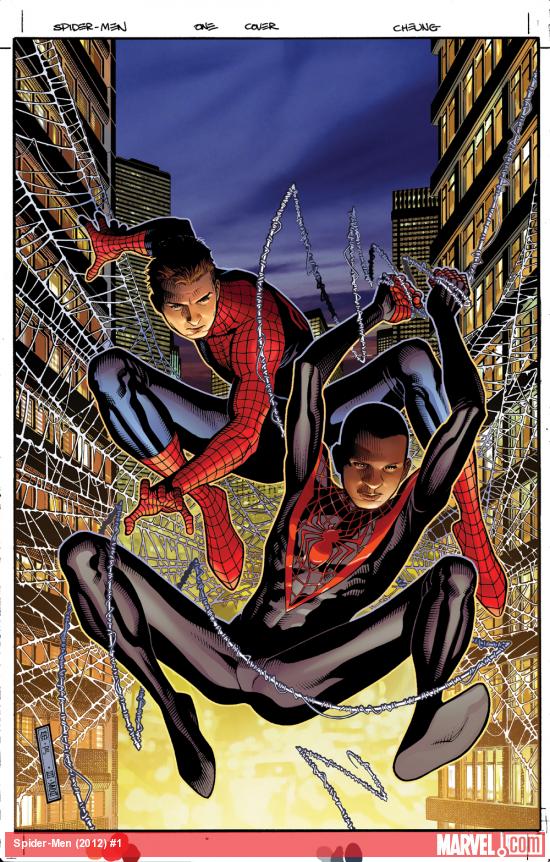 Spider-Men is a limited series from writer Bendis and artist Sara Pichelli that will ‘introduce the Peter Parker we’ve known and loved for five decades to Miles Morales of the Ultimate Comics Universe’.

Mark Paniccia: “We were at a Publishing meeting going over the upcoming anniversaries and plans for 2012. Joe Quesada suggested having Peter and Miles meet. Usually we’re all very conservative when it comes to the idea of crossing over between the two universes, but the 50th anniversary of our favorite wall-crawler seemed like a pretty good time to do something like this. We had lots of interest and momentum built up with Miles Morales and we in the Ultimate Office loved the idea of giving more readers the opportunity to discover this new Spider-Man.

Brian is doing what he does best with making us feel like we’re there. We experience the tension in the room, the electricity in the air, the intense emotions of the characters. There are some incredibly powerful moments for both Spider-Men, but especially Peter. There’s this one scene I thought was one of the most heart-wrenching moments I’ve read recently. But this isn’t a surprise from the man who made readers cry with Death of Spider-Man.

We’ve never really done anything like this before. I mean, when I came over to the Ultimate line, I thought of it as a re-interpretation of the Marvel Universe, a place where things could be re-imagined with a more realistic and modern sensibility. I didn’t look at it as an alternate universe. So just based on that I wasn’t that interested in crossing over to the Marvel Universe. My associate editor, Sana Amanat, felt the same way. Crossing over was almost considered blasphemy.

But, with the advent of such an endearing and interesting character as Miles Morales as the new Spider-Man, you couldn’t help but wonder what it would be like for him and Peter to meet. Since the Peter Parker of the Ultimate Universe is dead, there was no other Peter he could shake hands with or have the classic Marvel hero misunderstanding—or the awesome “let’s go get the bad guys” moment. This kind of day dream made it easier to imagine an actual crossover and start thinking of it as more of a possibility. We just needed the right reason and the right story. So this is a very different thing especially with the barrier between dimensions broken. And I think it’s a great place for Marvel fans to crossover, too, and see what life is like in the Ultimate Universe. I can’t think of a better gateway to discover ideas and concepts that inspired many elements of the movie franchises.

Sara [Pichelli] does action very well and captures emotional beats better than almost anyone else out there. And there are big, important and heartbreaking moments in this series so we couldn’t be happier having her. We get a lot of letters from people who think she’s just the best and love the characters she’s designed.

I think a lot of that has to do with the fact that she’s a master of expression not just with the face, but with body language as well. I think everyone who picks this book up is going to walk away a big Sara Pichelli fan!”