The very first original graphic novel from Image Comics Minotaur Press, titled Sunset and written by Christos Gage, will be released this July.

“In the noir tradition of Chandler and Spillane, comes a two-fisted tale of revenge and redemption. On the surface, Nick Bellamy looks like any other veteran retiree left behind by a modern world. In reality, Nick is a former enforcer, who stole a fortune and years of freedom from his former mob boss. Now, in the twilight of his life, Nick will lose everything except two things: revenge… and the chance to die with his guns blazing.” 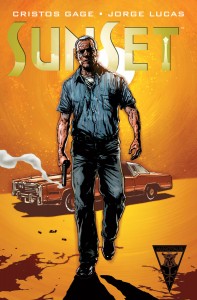 Look out for more details in May’s Illuminations, and make sure you add it to your subscriptions.