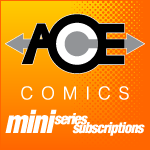 Something for all fans of Star Wars, Dark Horse have two fantastic miniseries on the horizon…

Star Wars: Rebel Heist is a four-issue miniseries written by Matt Kindt: “I guess I was inspired by the intimidation factor of those characters. I thought, “How great would it be to do a series where you get to see Han Solo from a regular dude’s point of view?” Which is basically my point of view! What if I got to tag along with Han Solo, and we had to do some mission for the rebellion? What would that be like? I thought something like that would be awesome.

So that was the springboard. It would be cool to have four core characters, and each issue would play with that idea — Princess Leia and a spy character who she teams up with, but it’s all from the point of view of the character Princess Leia teams up with. Viewing Princess Leia, viewing Han Solo, viewing Chewbacca, viewing Luke through the guise of a normal dude. Han Solo is like the coolest character ever, so it was fun to write that, where this guy’s sort of starstruck by him — just like I would be. Then they’ve got this mission to do, and doing a real mission where everything’s on the line, and your life is in danger — by the end of that issue, Han Solo’s not so cool anymore. This guy’s scared out of his mind. Han Solo’s kind of reckless.

That was my way in, almost viewing those characters in a childlike way, like I did when I was a kid, and you look up to Han Solo as the coolest. It was easy to write after that.”
 (Source CBR – Read the full interview here)

Darth Maul: Son Of Dathomir is also a four-issue series, this time focussing on unseen events involving Darth Maul from the Clone Wars TV show. It’s written by Jeremy Barlow: “We’re making these as new-reader-friendly as possible, understanding that some folks will be coming to this series without prior knowledge of the television show. All you need to know is that Darth Maul has returned, that he’s really pissed off, and that his former master Darth Sidious is determined to put him back in the ground, permanently.

Beyond that, Maul now serves a Dathomir Witch named Mother Talzin and together they’ve raised a ragtag army of hired soldiers and criminals, causing all kinds of trouble for Sidious’ plans for galactic conquest. There have been victories and losses for both sides, and as we come into Darth Maul: Son of Dathomir, Sidious has captured Maul and stashed him away on a remote prison planet made of obsidian. How cool is that?”
 (Source Newsarama – Read the full interview here)

For a limited time only, you can preorder these entire miniseries from ACE Comics by adding them to your basket from the links below:

A young Rebel meets one of the Alliance’s best for his first mission. But the young man’s hero worship is crushed by the reality of Han Solo. A botched escape, a ship that doesn’t work-could it be that Solo is just a lucky bumbler whose luck has run out?

Getting cut in half by Obi-Wan Kenobi and being rejected by his former Sith master Darth Sidious isn’t going to defeat Darth Maul. In fact, it only makes him mad enough to take on the galaxy-with an army of Mandalorians!

A part of The Clone Wars season 6 you never saw!

Miniseries Subscriptions are the easiest way to preorder upcoming miniseries. Add the title to your basket, complete the checkout, sit back, relax and the entire run of the miniseries will arrive regularly through the mail, bagged and boarded! An expected due date (subject to change) is listed for the first issue. Subsequent issues will be sent out as soon as we receive them.