Dark Horse have posted a extensive interview with the creative team behind BPRD Hell On Earth: The Devil’s Engine, Mike Mignola and John Arcudi.

They began talking about how they keep the branching series, timelines and time periods together…

Mike Mignola: “This is pretty much all I think about, so keeping stuff straight is pretty easy for me—at least the broad strokes. In fact, there is a ton of Hellboy-universe history that I’ve worked out that hasn’t found its way into the books yet. But for the really specific stuff—when and where specific things happened—that Hellboy Companion we did some years back comes in handy.”

John Arcudi: “I keep the whole stack of TPBs on my desk and refer to them with some regularity. I’ve caught myself several times right before I hit the Send button where I’ve made a huge gaffe and have to scramble for the rewrite.” 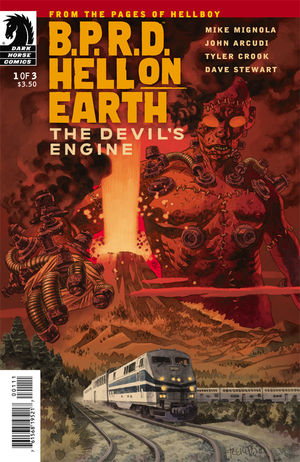 Dark Horse then asked them about the scale of the storyline.

Mike Mignola: “After the first couple of Hellboy short stories (“The Wolves of Saint August” and “The Corpse”), I realized how many stories there might be about Hellboy’s past, but I think things really started to take off with the second miniseries, Wake the Devil. I put a lot of new pieces on the board with that one—Roger, Hecate, and the Baba Yaga show up, Edward Grey is mentioned, and we get all that fun stuff with Zinco and the Nazis. Now it was clear this thing could go in a bunch of different directions, and there were suddenly a whole lot of characters that wanted to be fleshed out. At the same time I was starting to realize I didn’t want this to be a team book—I wanted to deal with who Hellboy was and where he was going. I saw the potential for a whole lot of different stories, but since I was the only guy doing the book I just didn’t know how much I’d actually be able to do. So I tried not to think about all that potential.

It all started to change when we did the B.P.R.D. spinoff book, and what started out as an experiment worked. When I wrote Plague of Frogs—that was like Wake the Devil—I introduced a lot of new stuff and gave the impression things were going somewhere. And then, really, when you came on board after that everything started to take off. I started to see just how big the story was, and that it might actually (with the help of a lot of really great artists) be possible to get that story into print. And with you firmly in charge of the ongoing story line, it’s freed me up to focus on the history—that’s what I’ve had the most fun with the last couple of years—creating these characters and events in the past and seeing how they relate to the ongoing story. Seeing things from the past, like the Heliopic Brotherhood (which started out as a joke), impact three or four different titles in a pretty organic way—that’s pretty exciting to me.”

And on the subject of their heroes and villains, they had this to say.

Mike Mignola: “All my major “villains,” starting with Rasputin, have sort of been on the side of evolution—moving the world forward towards its destruction, making a rebirth possible. The whole destruction of this world to make way for the next is lifted right out of Norse mythology—Ragna Rok. I love the big, epic finish, and you don’t get a bigger finish than gods fighting an army of monsters—they lose, but they go down swinging.

I wouldn’t know how to write a so-called villain who was just evil. Rasputin feels he’s been chosen to do this great thing. Mankind’s run its course, so it’s time to get the next thing up and running. It’s not that he hates mankind; he just knows where things are going, and it’s up to him to get things going in that direction. My “villains” are usually the guys with a clearer understanding of the big picture—that’s why they usually come across as crazy. The big picture is scary. It’s the kind of thing that would make a regular guy go crazy. And my “good guys” are usually regular guys. Even the monster ones like Hellboy and Abe think of themselves as regular guys. They don’t want to look at the big picture. They are usually fighting to keep things going the way things have been going. From a cosmic perspective, they’re the ones gumming up the works.”

John Arcudi: “I like to think about the histories of these guys, but mostly after World War II. Here’s a for-instance: I’d like to look more at Abe’s time at the Bureau between when he was found (in 1979) and 1994. In my head I’ve created a whole series of stories and relationships he had with agents other than Hellboy and Liz. This extends to Agent Sal Tasso, who Abe “rescued” from Scotland after The Abyssal Plain. I’d also like to look a little harder at some characters I created, too—agents Giarocco and Nichols, and even Captain Daimio (or at least his family history); and then there’s Fenix, but with any luck I can fit those histories into the main story lines without slowing things down.”