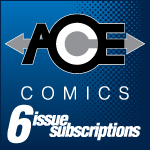 The trend for TV and movie properties transitioning from screen to comic book continues apace with a number of great new series beginning in October. Following in the footsteps of Buffy, Doctor Who, Smallville and Aliens, we have the following titles added to our subscriptions…

An all-new digital first series begins! Bridging the gap between seasons 2 and 3 of the hit TV series Arrow, Season 2.5 follows Oliver Queen’s story as he battles the Church of Blood, with the fate of Starling City hanging in the balance. Featuring an all-star cast of Oliver’s greatest allies and enemies including the Huntress, Black Canary and Deathstroke!

An all-new digital first series From the world of the highly anticipated new TV show The Flash! Follow the adventures of Barry Allen as he struggles to balance his job as a police crime scene investigator, his unrequited crush on Iris West (who also happens to be his boss’ daughter) and his new life as Central City’s guardian angel! Don’t miss out!

The wait …is over! The Power of Three finally returns in Zenescope’s official continuation of Charmed! When an ancient evil older than time itself targets the Charmed Ones, they will have to call on help from the magical community… including their estranged sister Prue and the former demon Cole… for help. But will it be enough when an Old One sets its sights on the Halliwells?

An all-new adventure revisiting Edward Scissorhands five decades after the end of the fan-favorite movie! In castle just outside a sleepy suburban town, a brilliant inventor created Edward Scissorhands…but left him tragically unfinished. Two generations of exile have left Edward digging through abandoned experiments, but once he wakes up a creature left buried, he discovers he isn’t the only one missing a vital piece. As Edward tries to fix a grave mistake, he comes face to face with a teenage girl who was sure he was only myth… despite the stories her grandmother told her, about the man she could never touch.