Marvel are producing a new, free Captain America comic for U.S. troops, through ‘Exchanges’ located on U.S. military bases around the world. This is the seventh year that Marvel Customs and the Army & Air Force Exchange Service have been producing comics specifically through Exchange where, for more than 116 years, their mission has been to support the men and women of the armed forces and their families during military operations, humanitarian missions and other endeavors globally.

Captain America: First Avenger, the twelfth installment of the free Exchange comic book was written by William Harms, drawn by Michael Avon Oeming and colored by Nick Filardi. The story, set in World War II, focuses on a 1943 Army recruit who finds a Captain America comic and his challenging adventure therein. We meet our protagonist during the rigors of boot camp since many view it as one of the most challenging periods in any soldier’s life, away from home for the first time and constantly being pushed mentally and physically. The creators found it a great way to show the before and after for the soldier who finds the comic and how it directly impacts him, providing the young private with the mental and emotional strength to persevere. 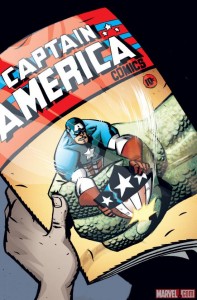 Get the full scoop here.