Originating as a free sci-fi webcomic in 1996, Finder:Voice is an original graphic novel in the series, released in early 2011.

“Finder is, bar none, the best SF comic being published today.” – Strange Horizons

“I love Carla Speed McNeil’s Finder, and I imagine the reason I love it is the same reason it doesn’t get more attention in the comics press: it’s simultaneously straightforward and labyrinthine, genre-based and uncategorizable . . . For me, and for other readers who have gotten pulled into McNeil’s weird and woolly far-future world, Finder is one of those comics.” — The Comics Journal

“McNeil conveys more emotion and depth through the slick line of a raised eyebrow than most can with an entire book, played out in a world that is unquestionably familiar and unshakably alien.” — Bleeding Cool

Want to find out what all the fuss is about? You can grab a copy below: 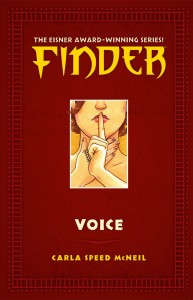 In a society defined by its intricate network of clans, Rachel Grosvenor has grown up an outcast, straddling worlds. Now, her quest for admission to a highly exclusive clan sends Rachel spiraling into the dark underbelly of Anvard and a paradox that holds the key to her future: How do you find a Finder?