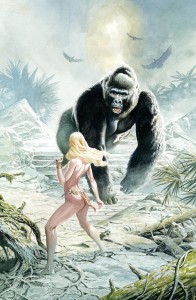 We’re big fans of apes at ACE, especially big ones, and that’s just what J.G. Jones has given us in his wonderful front for Creepy Comics #15. Although unrelated to the fine selection of classic, eerie, black and white adventures inside, it is a beautiful piece of ‘Kong’-like painted art bound to appeal to fans of vintage horror. 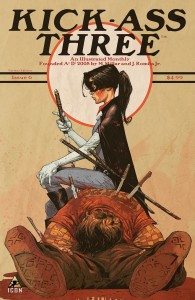 Kick-Ass 3 #6 has a number of covers, and this one, by Jerome Opena, is our pick of the bunch. Featuring Hit-Girl atop a fatally defeated foe, the style and layout of the artwork, coupled with the weathering and 70’s retro text harks back to the covers of adventure novels of the past. Easily one of the very best of this week’s covers. 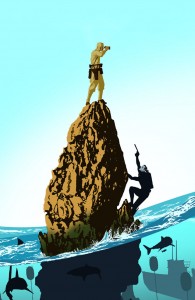 Matthew Reynolds’ front for Mercenary Sea #1 almost won it this week. It is arguably the best looking comic book released on Wednesday, with the artwork (interior and exterior) oozing the type of cool associated with adventure serials (this one taking place in 1938). There are a number of classic elements on the front as we see Captain Jack Harper sneaking up on an enemy soldier, the rock they’re on jutting out of the sea with visibly circling sharks beneath the waves. Mercenary Sea is a highly recommended read for fans of Indiana Jones and pulp adventure! 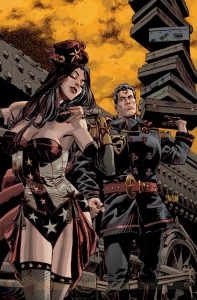 Dan Panosian’s Steampunk variant cover for Superman / Wonder Woman #5 is a great front, featuring a uniformed Man Of Steel carrying a vast number of cases from a huge steel train for the Amazon Princess, herself decked out in a star-spangled basque with a jaunty hat! It’s always refreshing to see characters such as these in an otherwise unfamiliar guise, especially when illustrated with such skill. 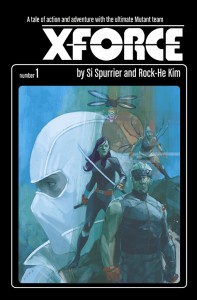 If you thought that the regular cover for X-force #1 was less-than-impressive and a bit generic, you should look out for Phil Noto’s great variant. Like Kick-Ass 3 #6, this front works really well with the cover text, giving the appearance, once again, of a classic action novel from the past, complete with tagline. Plus Noto’s art is, as usual, fantastic. 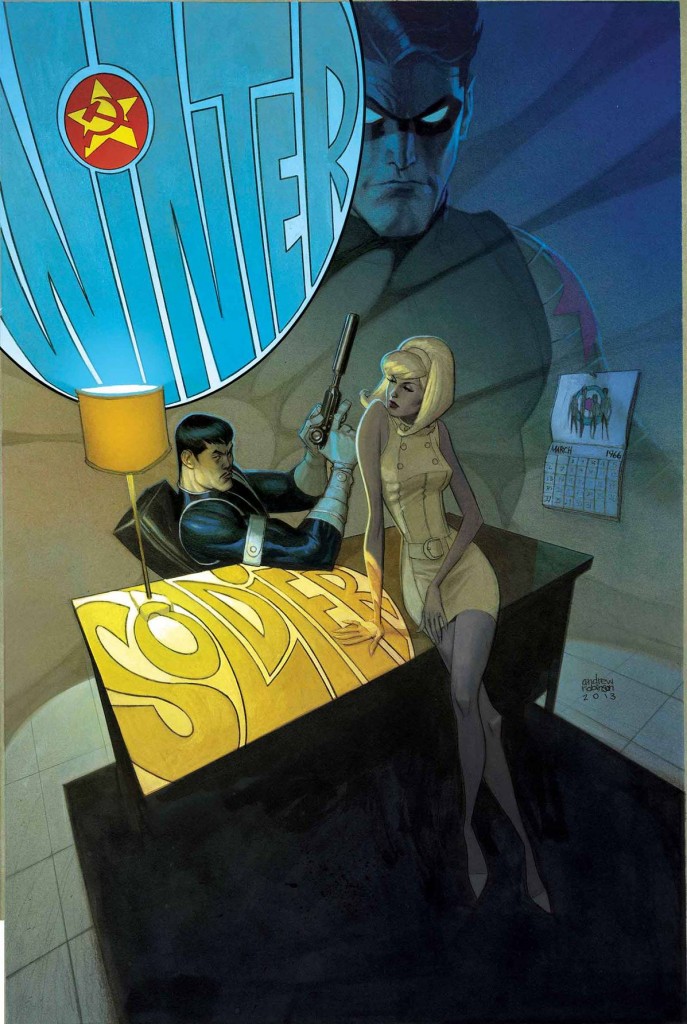 Winter Soldier: Bitter March #1 is not only our pick of the week from this week’s comics, but also our 7th top-rated comic book cover for 2014. Beating close rival Mercenary Sea, Andrew Robinson’s art just exudes more style and skill than his competitors, from the shadowy, mysterious office location and the gun-toting, Asian S.H.I.E.L.D. agent behind the desk to the sassy, 60’s chick sitting on the desk and the huge image of the Winter Soldier looming over them. The comic title is squeezed into the art in a style befitting of the period and the whole thing is painted beautifully. In a word …FAB!

Congrats to Andrew and Marvel, they get the paper crown this week! 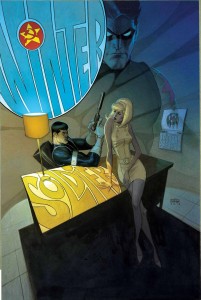