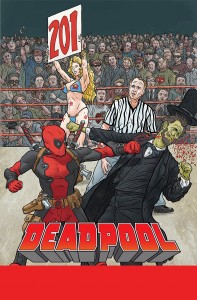 A topical cover for issue #4 of Deadpool, as it shows our favourite Merc-With-A-Mouth duking it out with US President Abraham Lincoln, himself the subject of Steven Spielberg’s movie, also released this week.

The cover features Geof Darrow’s super-attention-to-detail and sits nicely alongside the other Deadpool title out this week. Which leads us on to our second pick… 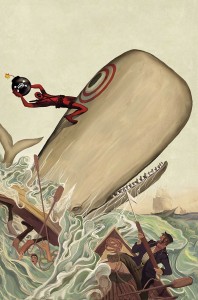 Following the success of ‘Deadpool Kills The Marvel Universe’, the powers that be thought that DP should move beyond the comic book realms, so here we have Deadpool Killustrated #1, the first in a new series where DP goes up against famous characters from literature, beginning with the tale of Moby Dick.

Michael Del Mundo provides a classic-looking cover which would perfectly suit a paperback copy of Herman Melville’s 1851 novel, were it not for Deadpool’s massive bomb, and the big target around the whale’s blow-hole! 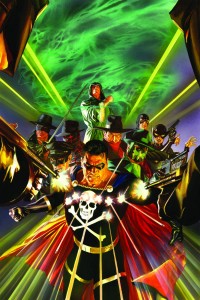 A well composed super-team image is always a winner a ACE Comics, and when your cover artist is Alex Ross, it’s double-bubble!

Masks is Dynamite’s great series collecting together their cadre of classic pulp heroes including, The Shadow, The Green Hornet, Zorro, The Spider, Miss Fury and more. The series has had a number of great covers, particularly those from painter-extraordinaire Ross, but issue #3, with The Black Terror leading the charge against machine-gun-toting bad guys, is a doozy. 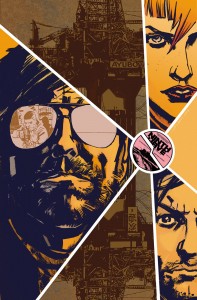 We love Brian Wood’s The Massive, a spiritual successor to DMZ focussing on Callum Israel and the crew of The Kapital, a ship of environmentalists finding their feet in a post-apocalyptic world. Not only is it a truly great read, but it has been adorned by some wonderful covers.

Here J.P Leon presents a collage of close up portraits and a foreboding image of the oil-rig, drawing the eye and hinting at the tension within. 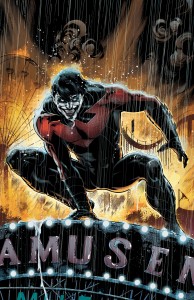 The ‘Death Of The Family’ storyline has proven to be a massive success for DC’s New 52, and this week sees it spill over on to the cover of Nightwing #16.

Eddy Barrows has perfectly captured Dick Grayson, gurning with a ghoulish Joker-grin, atop an amusement park sign. If that wasn’t creepy enough, add some lashing rain and back-light him in front of the park in flames, and you have something really striking. 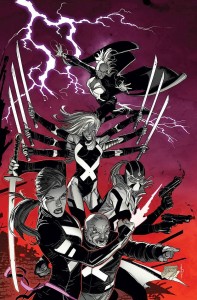 Another super-team now as Psylocke, Storm, Puck, Spiral and Cluster team up as the new X-Force!

Being a new Marvel NOW! series, Uncanny X-Force #1 naturally has a billion covers, and we’ve opted for Ron Garney’s excellent variant. A great, heroic composition that benefits greatly from using colour only in the storm clouds gathering behind our new X-Force. Nice. 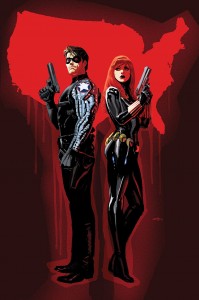 Not neccessarily the most striking of this week’s covers, Daniel Acuna’s front for the Winter Soldier #14 is nonetheless, a fine piece of work.

The adventures of Bucky Barnes have been great episodes of espionage and Ed Brubaker’s final issue in his highly successful stint on the series is adorned by Acuna’s classically posed back-to-back Bucky and the Black Widow. Beautifully rendered and very ‘Bondian’.

There can, however, only be one, and this week our Cover Of the Week goes to… 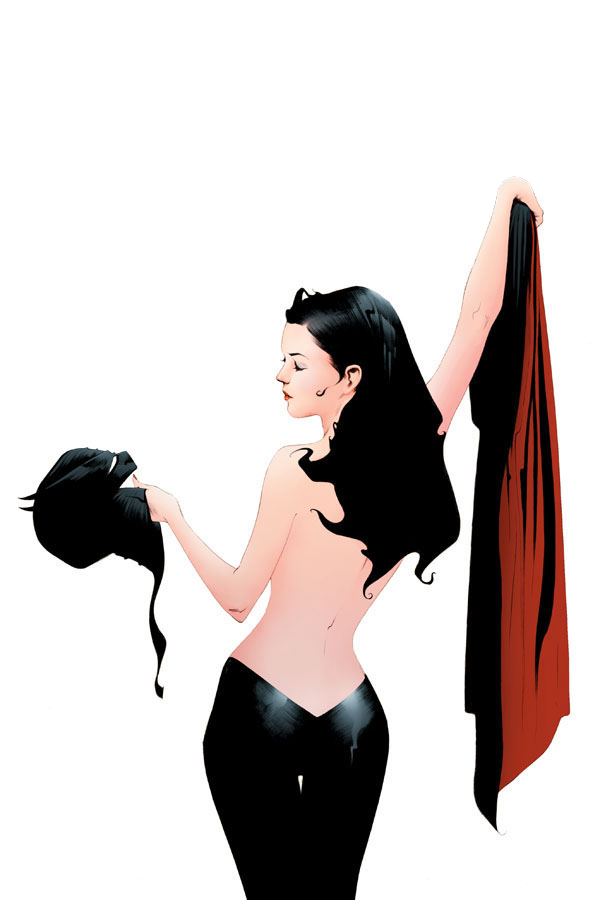 We’ve already shown Alex Ross’s fine contribution for Masks #3 above, but the general consensus was that Jae Lee’s variant cover pipped him to the post.

In what could be seen as a nod to the provocative depiction of DC’s Catwoman, Lee’s Masks #3 presents Marla Drake removing her Miss Fury costume against a plain white background, gazing at her mask. The cover is simple, elegant and focuses on the woman beneath the superheroine exterior.

Congrats to Jae and Dynamite, they get the paper crown this week! 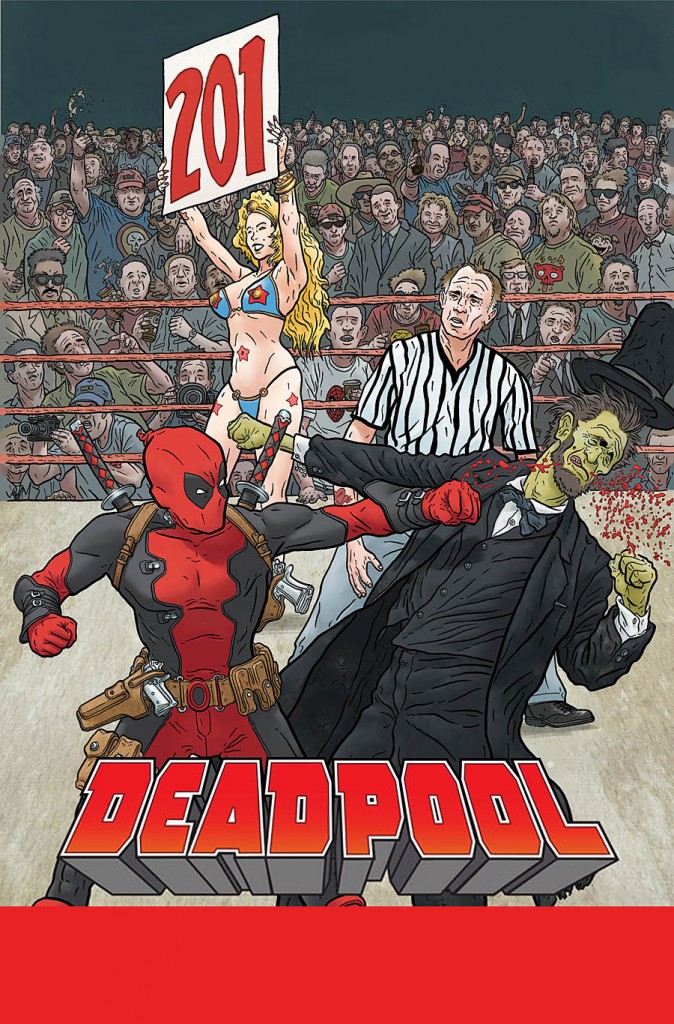 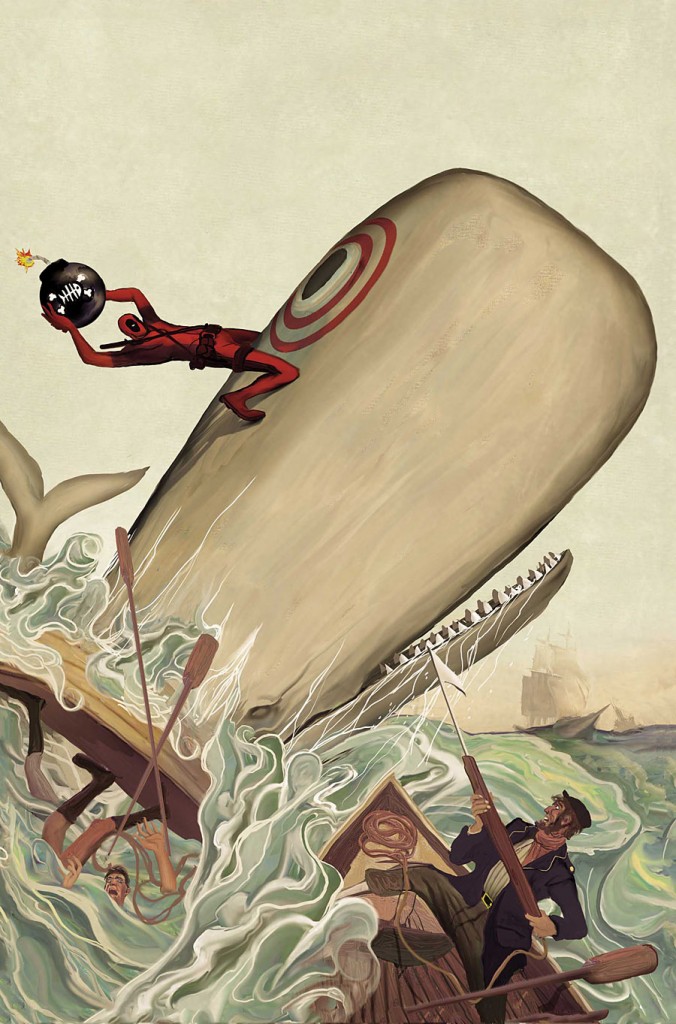 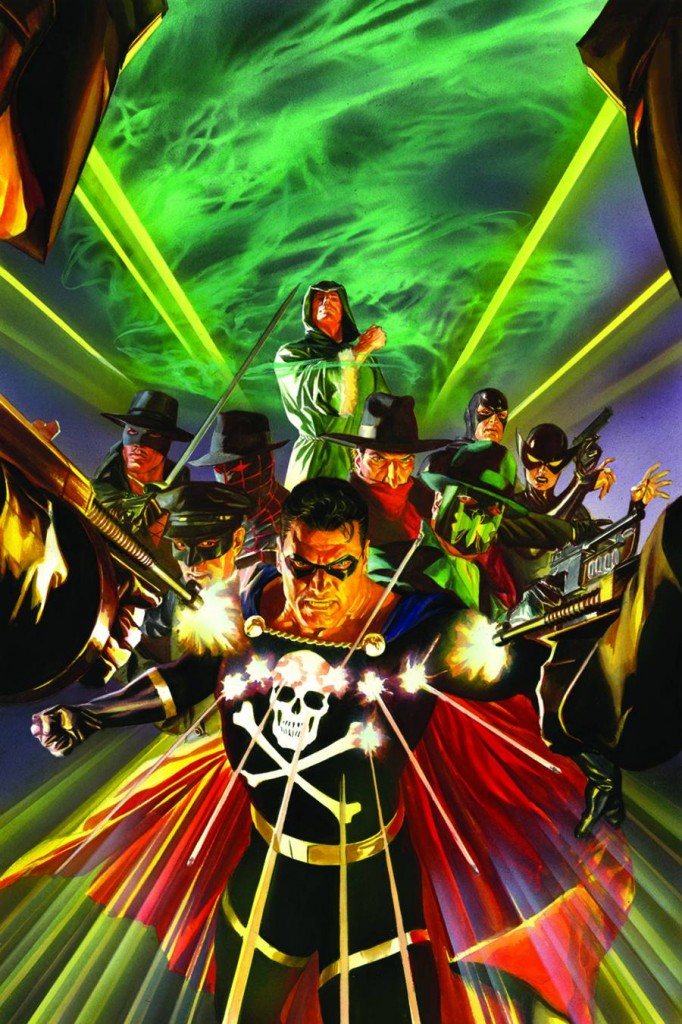 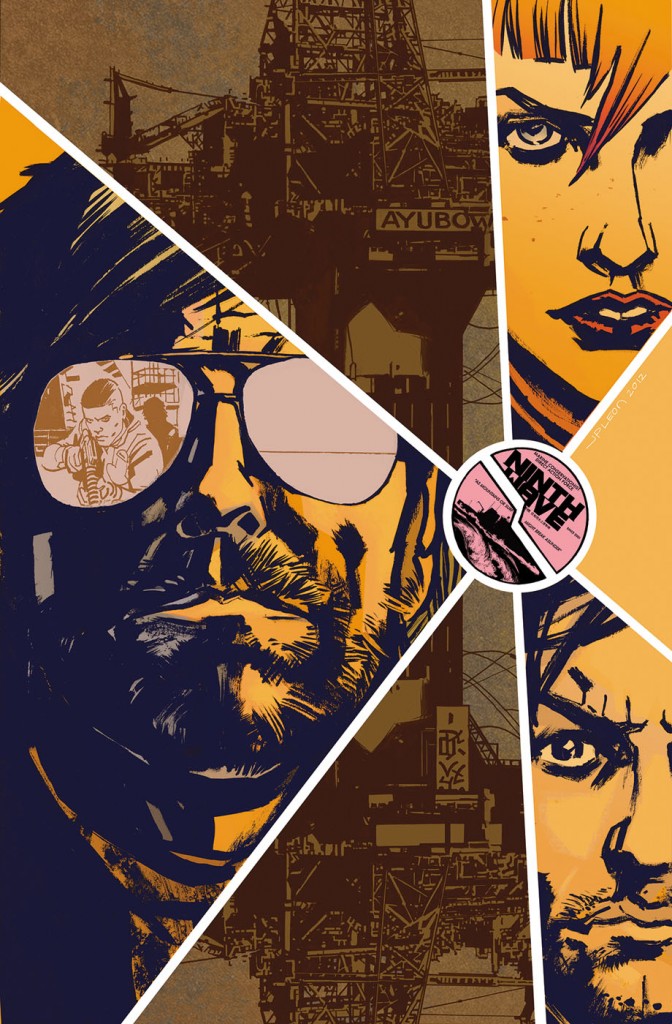 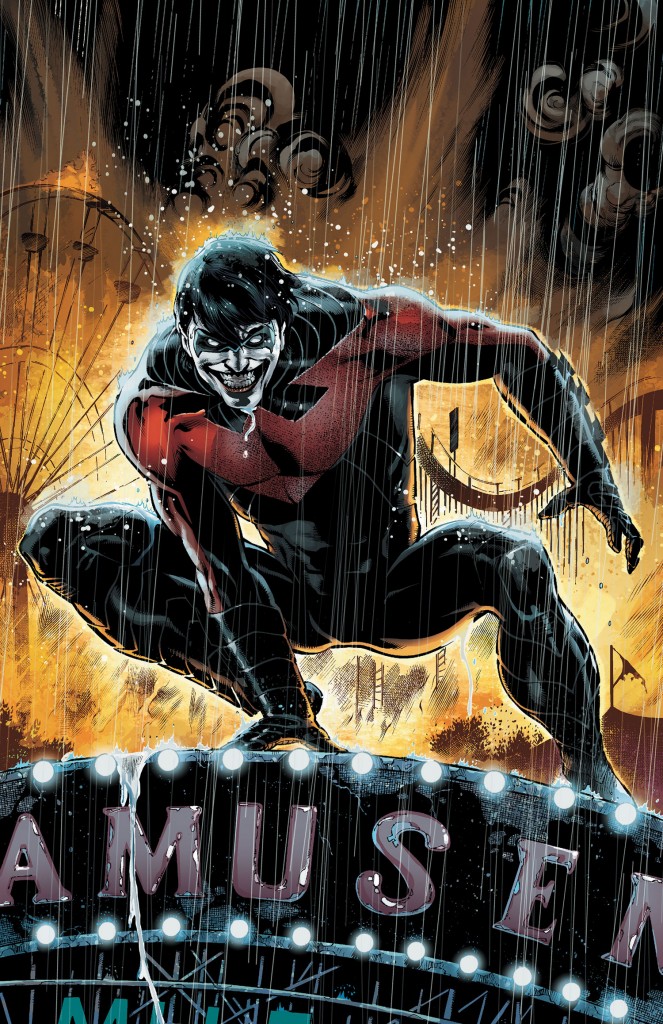 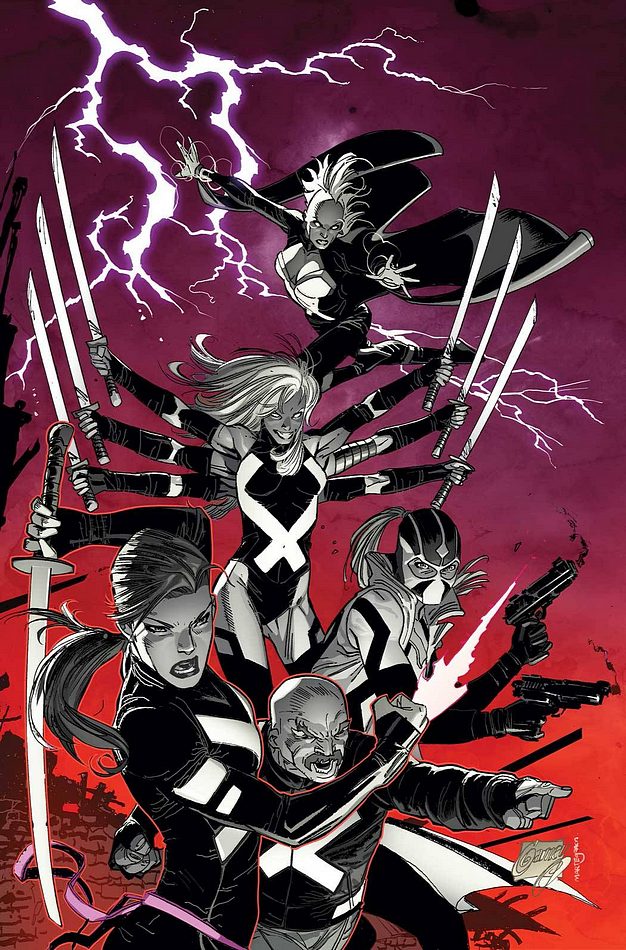 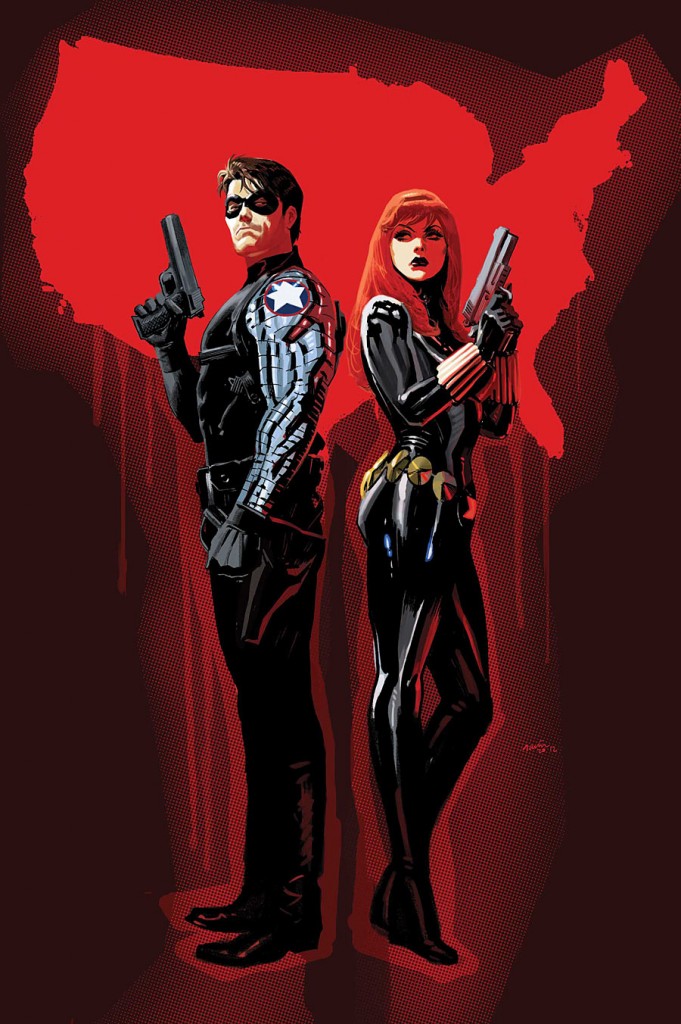