DC’s Villains’ Month has kicked of with a slew of the 3D lenticular covers this week. They have been very impressive and we have a few included in our Cover Of The Week shortlist. This great front for The Joker #1 by Jason Fabok is proving to be very popular. It’s a typically terrifying image of The Joker staring at the reader, mid-tyrannical laugh. What makes it all the more disturbing is the fact that, in 3D, it breaks the barrier of the printed page and almost puts us in the same room, and that’s not an ideal place to be!

Make sure you click on all of the DC Villains’ Month 3D covers in the gallery for a great, animated version of the cover!

Another of the DC Villains’ Month covers, Batman And Two-Face #1 by Chris Burnham, makes wonderful use of the 3D aspect. With Batman chained up behind, the perspective of Harvey’s tossed coin in the foreground is composition genius! 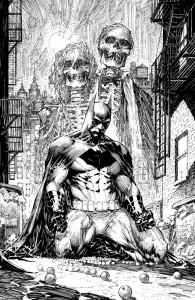 Clearly setting itself apart from the entriety of the other comics released this week, Batman: Black And White #1 features Marc Silvestri’s bold and brilliant, black and white art depicting Batman on his knees in Crime Alley, the pearls from his mother’s snapped necklace serving as a cold reminder of the fate of his murdered parents, who themselves watch on behind in frightening, skeletal form. Striking stuff. 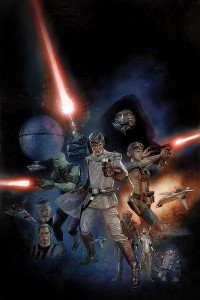 George Lucas’ original Star Wars script get the Dark Horse comics treatment, beginning with #1, out this week. For the cover, Dark Horse have enlisted no less than three extremely talented artists to pay homage to Tom Chantrell’s iconic British film poster for Star Wars. Jan Duursema, Nick Runge and Doug Wheatley have all done outstanding jobs, but we’ve pipped for Nick Runge, as his classy effort also bring to mind the fabulous work of the Hildebrandt brothers on the Special Edition and Prequel release posters. 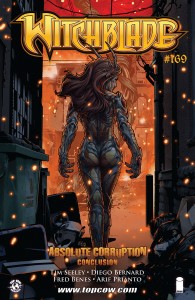 Now an iconic image of Sara Pezzini, Witchblade #151’s cover artist, John Tyler Christopher has returned to that famous illustration with a nice book-ender on the front of issue #169. The composition shows Pezzini heading in the opposite direction, out of the alley, into the street and away from the reader, now garbed in the familiar Witchblade attire – a fitting tribute to the fine creative team that have brought their run on the book to a close with this issue.

Cover Of The Week #36 Winner

Tony S. Daniel has produced one of the best of DC’s Villains’ Month 3D lenticular covers with Deadshot #1. Like the other covers in the series, it’s a great image of the primary antagonist facing the reader, but with the Justice League of America strewn across the floor behind him, it’s the muzzle flash of his weapon and the bullets the foreground, flying out of peripheral vision, that add the levels of excitement and danger, placing us directly in the firing line!

Congrats to Tony and DC, they get the paper crown this week!