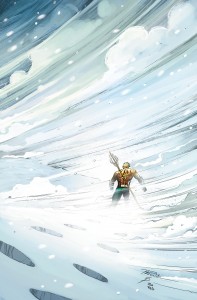 Paul Pelletier’s cover for Aquaman #21 is all about space (not the intergalactic kind). The only real content is a small image of Aquaman, trudging away from the viewer in the snow. All of the detail is focused on the weather, with a huge wind whipping across the scene, raising clouds of snow into the air around our hero. While containing virtually nothing, it remains a dramatic and engaging front. 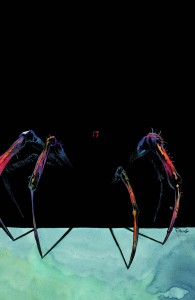 Suprisingly, the second cover on our shortlist this week echoes the theme of the first. Fábio Moon’s front for BPRD Vampire #4 is almost entirely black, apart from some colour to indicate the floor at the bottom, four rather large and scary spider-legs stepping out from the shadows, and what appears to be some bloody fangs hanging in the blackness. A simple idea the uses shadow and space perfectly, while being equally terrifying and unmissable at the same time. 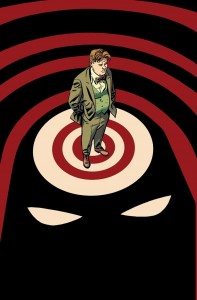 A stylized cover adorns Dardevil #27, courtesy of Chris Samnee, which features Foggy Nelson standing at the centre of the rings on Bullseye’s mask, surrounded by rippling circles. Apart from Foggy, the colours are a simple black, white and red, and the target of circles is a big pull for our attention. 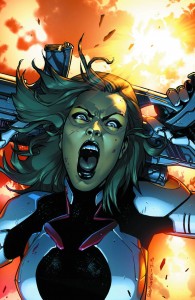 GUARDIANS OF THE GALAXY #4
Cover by SARA PICHELLI

The cover for Guardians Of The Galaxy #4 is very much in-your-face. A close-up portrait of a raging Gamora, her weapon held over her shoulder with brilliant flame-like clouds behind her, this is one Guardian we wouldn’t want to come face-to-face with in a moment like this. The fury was personified perfectly by Sara Pichelli. 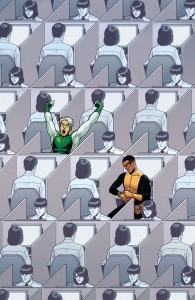 We love this cover. Certainly not your run-of-the-mill superhero fare, Jamie McKelvie’s inviting front for Young Avengers #6 concentrates on the uniformity of characterless, indistinguishable, cubicle dwelling office workers. Contrasting the repetitiously patterned, grey-hued employees sit Young Avengers Speed and Prodigy, in full-colour and clearly not fitting in to the office environment they have found themselves in inside the book.

It’s all about the shouty covers this week… 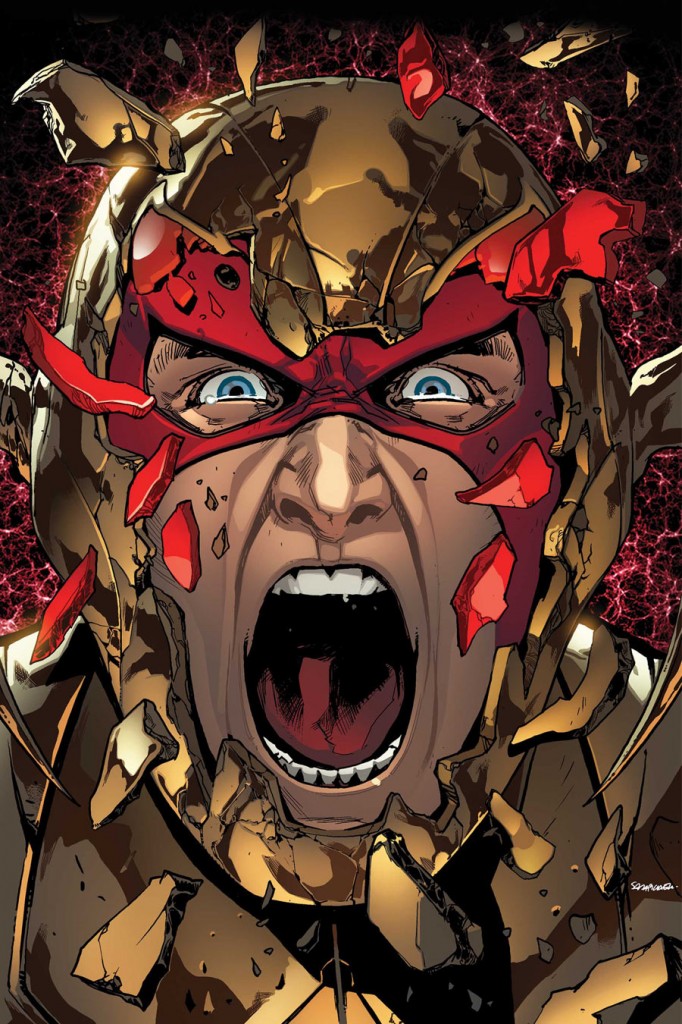 And it’s Sara Pichelli again, providing her second shouty-in-your-face front, this time for Age Of Ultron #10-AI. While we loved Chris Samnee’s Daredevil cover and Jamie McKelvie’s Young Avengers one, the intense image of Hank Pym’s tortured face bursting forth from the exploding helmet of Ultron is just too strong and attention-grabbing, that it literally screams at you from the comic shelves, beating away all competition. Powerful stuff.

Congrats to Sara and Marvel, they get the paper crown this week! 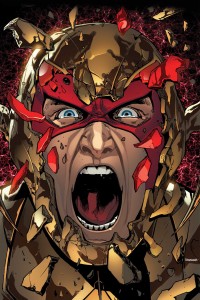