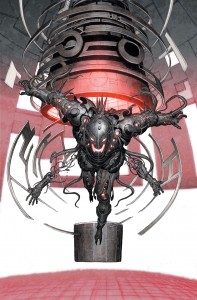 ‘Age Of Ultron’ is proving to be very popular with the Marvel fanbase and ACE Comics’ own Biff has been very impressed, himself. The best of all of the cover artwork for this series has been present on the number of variant covers available. Adi Granov is providing a series of variant covers that make up a sequence of Ultron detaching from his connections, transforming and leaping towards the reader. Issue #3 is the first instance of Ultron leaping towards us and he cuts a menacing figure in the muted palette of greys, reds and pinks. 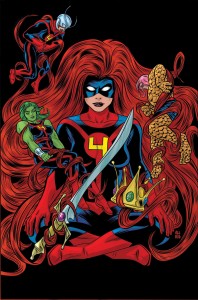 You can usually rely on Mike Allred to produce an interesting cover and his entry for ‘FF #5’ is no exception. In his instantly distinguishable style, Allred presents us with Ant Man, She Hulk and Miss Thing entangled in the locks of Medusa’s hair. A fantastic mix of hyper-detail and stylized-simplicity, it’s been THE standout cover from Allred on this series so far… 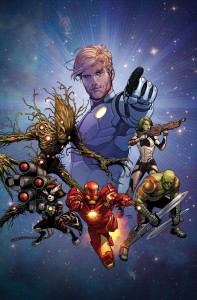 GUARDIANS OF THE GALAXY #1
Cover by STEVE McNIVEN

This week’s hottest new title, ‘Guardians’ was released with a slew of variant covers from the likes of Joe Quesada, Milo Manara, J Scott Campbell and Skottie Young, but it’s the regular cover by Steve McNiven that we feel packs the most punch. Featuring Star Lord as the centrepiece for a heroic team-shot, McNiven has produced an exciting debut cover which has only helped to pique interest is this great new series. 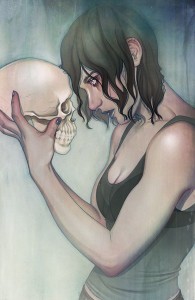 After a run of nine years, Tim Seeley’s ‘Hack/Slash’ reached it’s final issue this week with #25. Lauded for giving the characters a cathartic, fitting finale which may not end well for those involved, the issue features a trio of covers. Our favourite was Jenny Frison’s B Cover, showcasing a sombre Cassie Hack staring into the eyes of a skull. Quite the opposite of Chris Giarrusso’s ‘cute’ cover, Frison’s exudes a sadness that transcends the mere front of the comic. A touching finish. 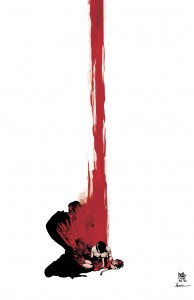 I, VAMPIRE
Cover by ANDREA SORRENTINO

Less is more. Pretty much always a winning formula, and one that works effortlessly on the front of ‘I, Vampire #18’ with Andrea Sorrentino’s stark, yet striking cover. Containing the death of a ‘major character’, the simple cover focuses on a huge blood-red streak set against the stark white background, with two figures resembling Andrew Bennett and Tig Rafelson at the base. 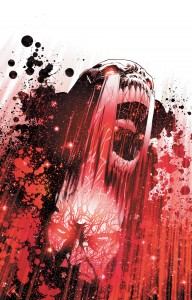 Miguel Sepulveda’s cover for ‘Red Lanterns #18’ is a stunner. With a colour scheme of red, white and black, Sepulveda serves up a brilliant, paint-splattered portrait of Atrocitus undergoing some mental torture at the hands (or mind) of Volthoom. Rage and pain in abundance! 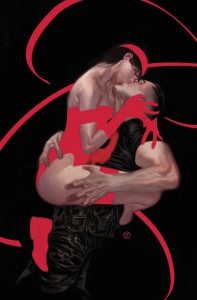 Another cover utilizing reds and blacks (there’s a few of those this week…), Guiseppe Camuncoli’s beautiful front for ‘Thunderbolts #7’ shows master assassin Elektra wrapped in an embrace with the Punisher. While this image is not one Deadpool would be keen on (see the issue!), it is nonetheless a fine piece of work and, through the use of Elektra’s costume, one that is elevated beyond just another ‘superheroes kissing’ cover. 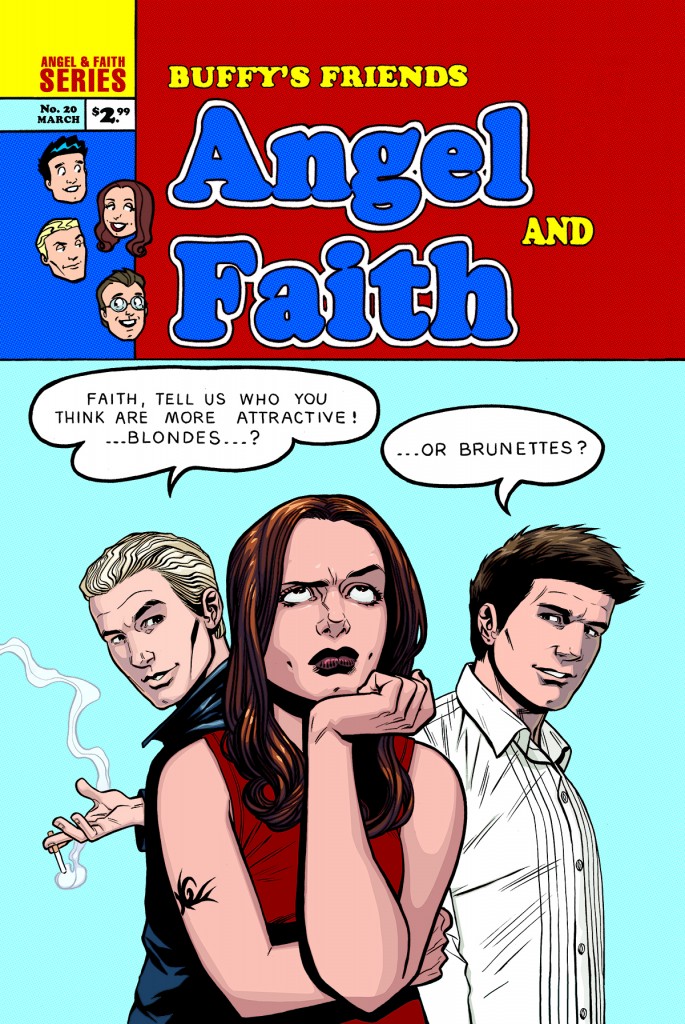 Appealing straight to our homage-loving-hearts, it’s really difficult not to love series artist Rebekah Isaac’s ‘Archie’ inspired cover for ‘Angel and Faith #20’. Turning the Archie-Betty-Veronica love triangle on it’s head, we have Faith as the centrepiece, flanked by an admiring Spike and Angel. The brilliant front is completed with authentic lettering/numbering and the grinning, disembodied heads of Faith, Angel, Spike and Giles at top-left. Superb!

Congrats to Rebekah and Dark Horse, they get the paper crown this week! 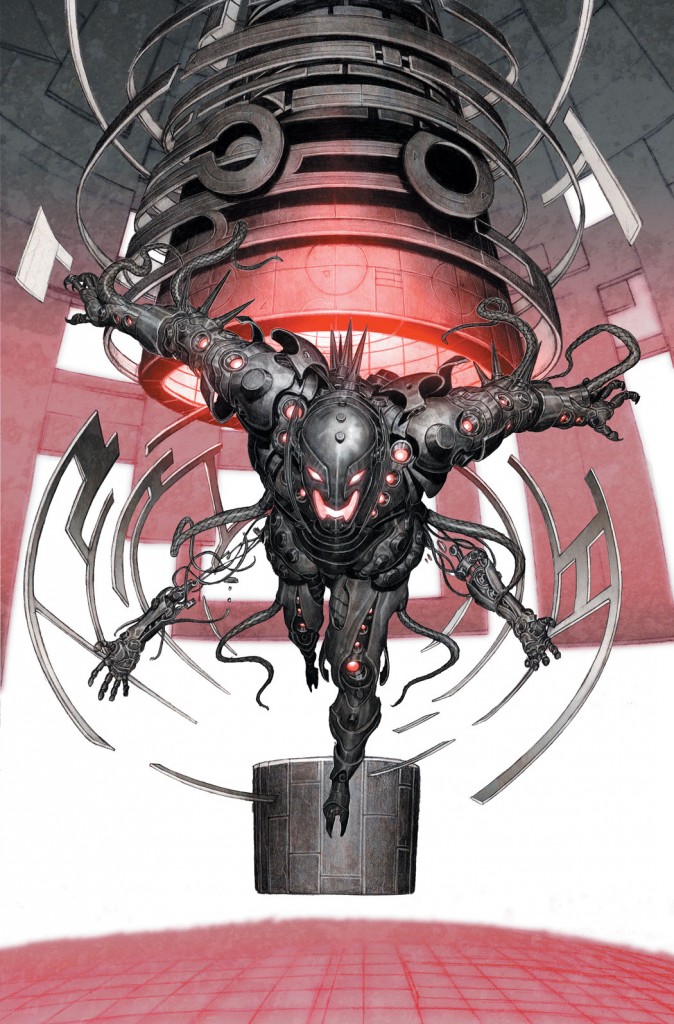 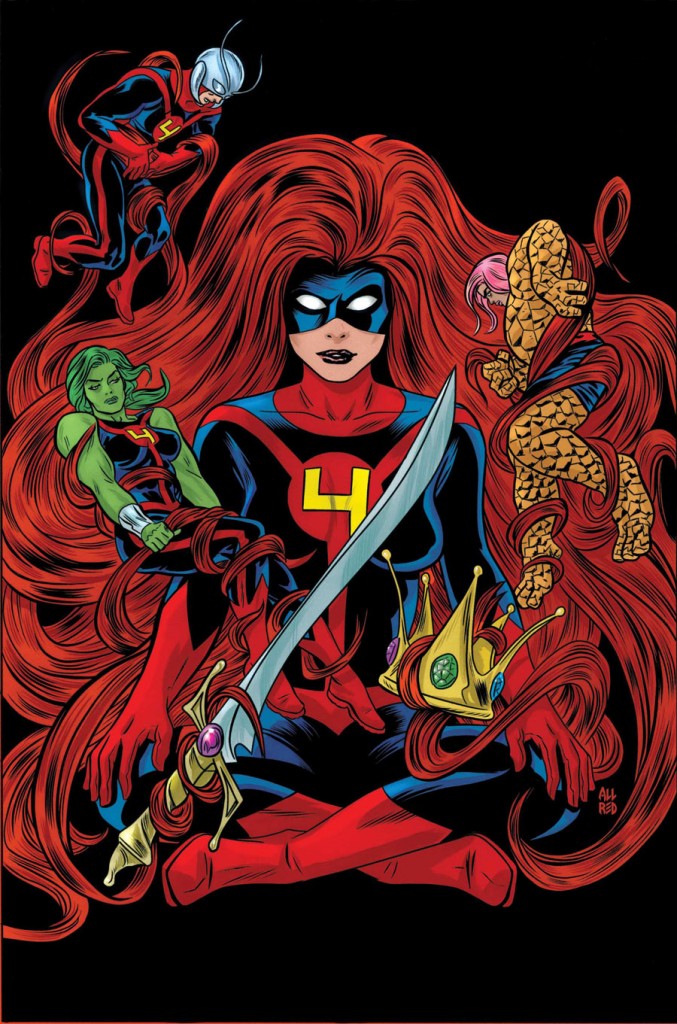 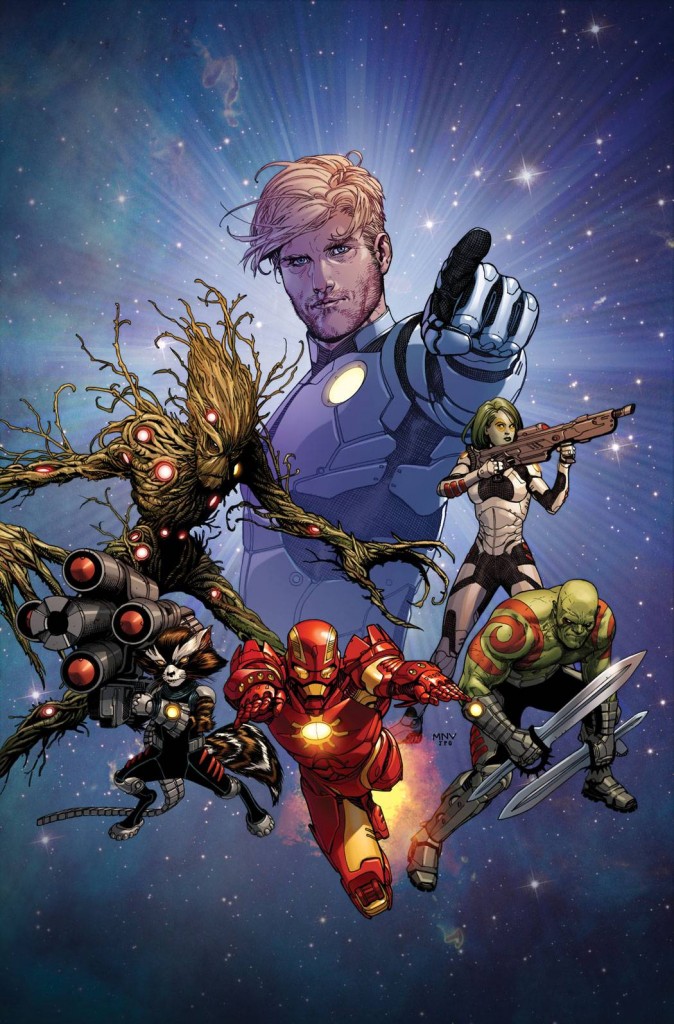 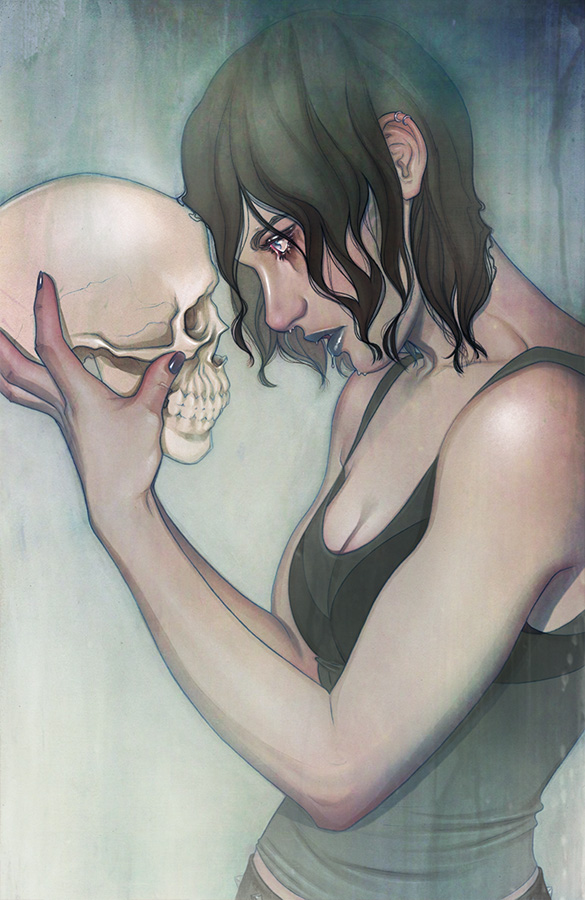 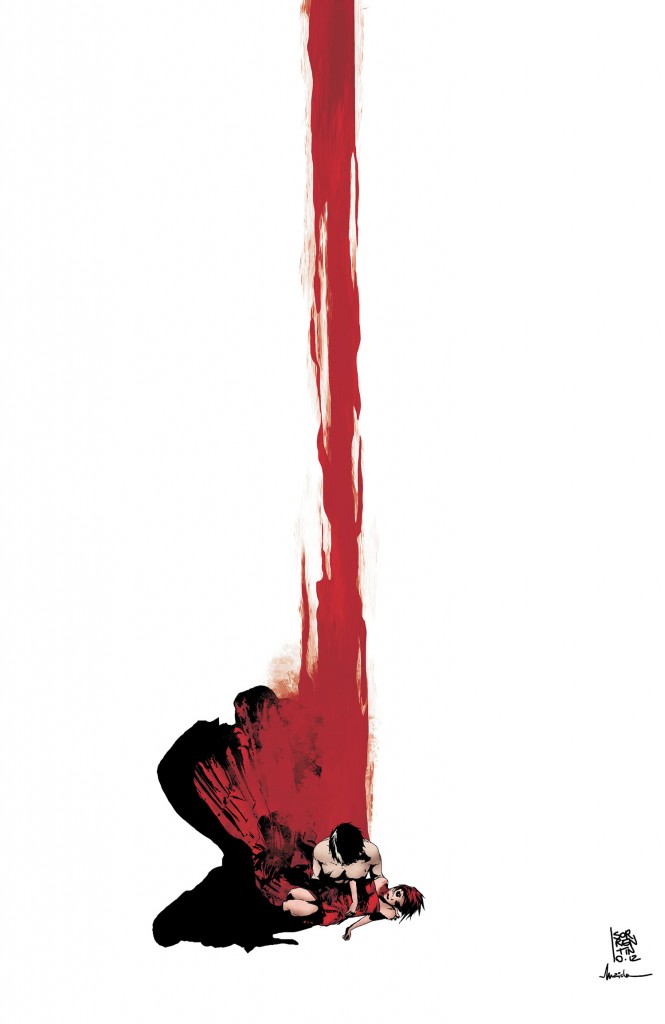 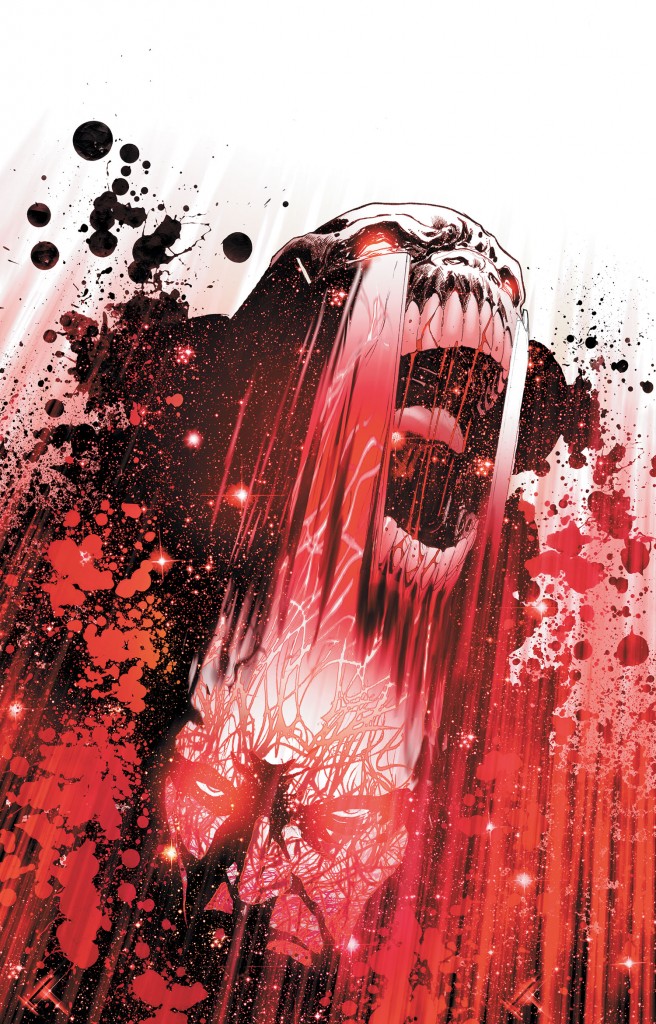 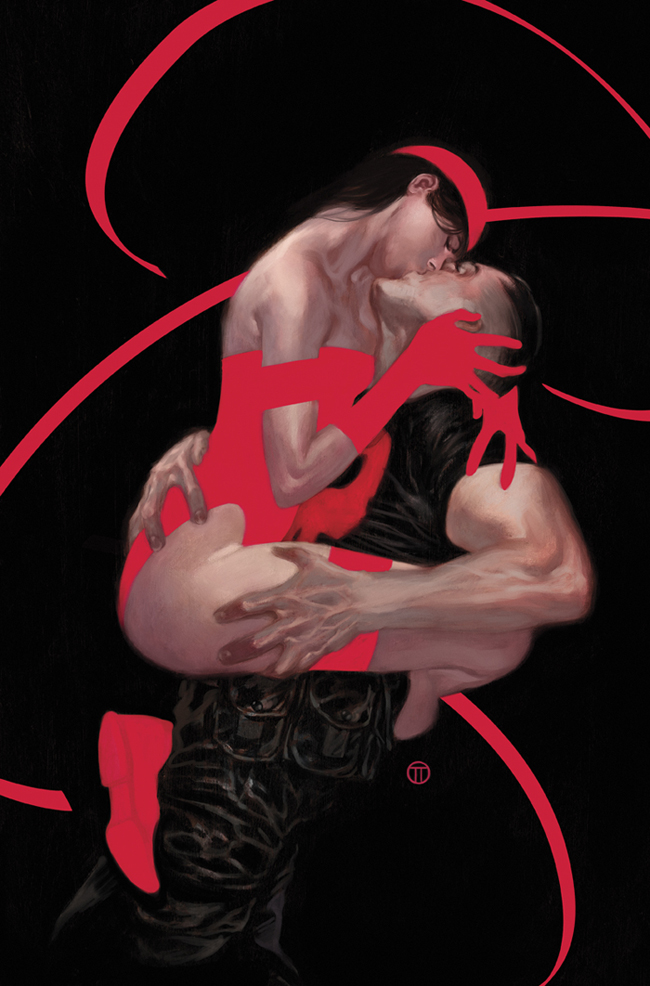