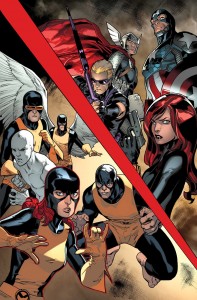 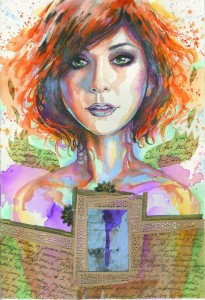 David Mack delivers yet another beautiful comic book cover, the fifth in his run on Buffy The Vampire Slayer: Willow Wonderland. A pretty straightforward portrait of Alyson Hannigan as Buffy’s witchy pal is infused with Mack’s mixed-media touch, elevating it to extremely eye-catching status. 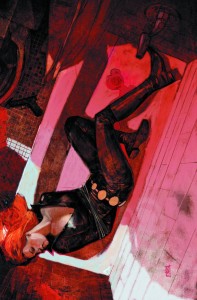 Alex Maleev has a great history of being associated with some of Daredevil’s finest tales, during his critically-acclaimed partnership with Brian Michael Bendis. They’re back working on the horned-hero together on Daredevil: End Of Days, this time with Maleev providng the covers and splash pages only. Issue #6 shows the Black Widow, bound, in an empty bath, with a handgun on the floor beside her. Quite what this means, we’ll leave it for you to find out, but it’s a brilliant high-angle perspective piece, full of mystery and hued in red. Unsurprisingly, this book is also turning out to be critically-acclaimed. Are you reading it? 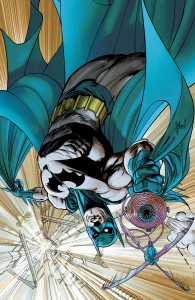 LEGENDS OF THE DARK KNIGHT #6
Cover by GUILLEM MARCH

Guillem March’s cover for the digital-first Legends Of The Dark Knight #6 comic is a classic, dramatic piece. A POV composition illustrating an upside-down (to the viewer), falling Batman, firing his grapple gun straight towards us perfectly captures the disorientating situation the Dark Knight has found himself in. Add to that the bright-blue chosen for Batman’s cape against the pale yellow of the onrushing city below, and this book leaps off the shelves! 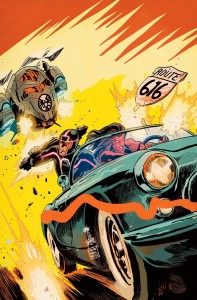 The cover for Red She-Hulk #63 is an action shot in the instantly recognizable stylings of Francesco Francavilla. Coloured primarily in his favoured oranges, reds, yellows and greys, it’s an exhilarating piece showcasing Betty Ross and Machine Man on the run from a pursuing S.H.I.E.L.D. helicopter, explosions illuminating the background and gunfire ricocheting off of the road and their car! Easily the most exciting cover on display this week. 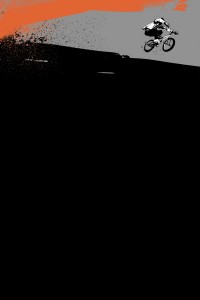 Jock’s art is very popular at the ACE headquarters, so he was always a shoe-in for the shortlist this week. Snapshot #2 came out on Wednesday, with Jake Dobson hurtling along on a bicycle on the cover. The use of just a couple of colours against the lone illustration of Jake on the bike, plus the fact that this image takes up only a quarter of the whole page, right at the top (the remaining three quarters of the cover is black), conveys the urgency and pressure on the character, and mirrors a dramatic chase on the pages within. Not wonder he’s popular, that Jock. 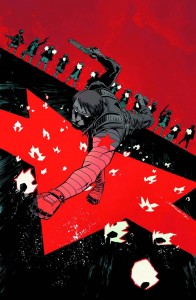 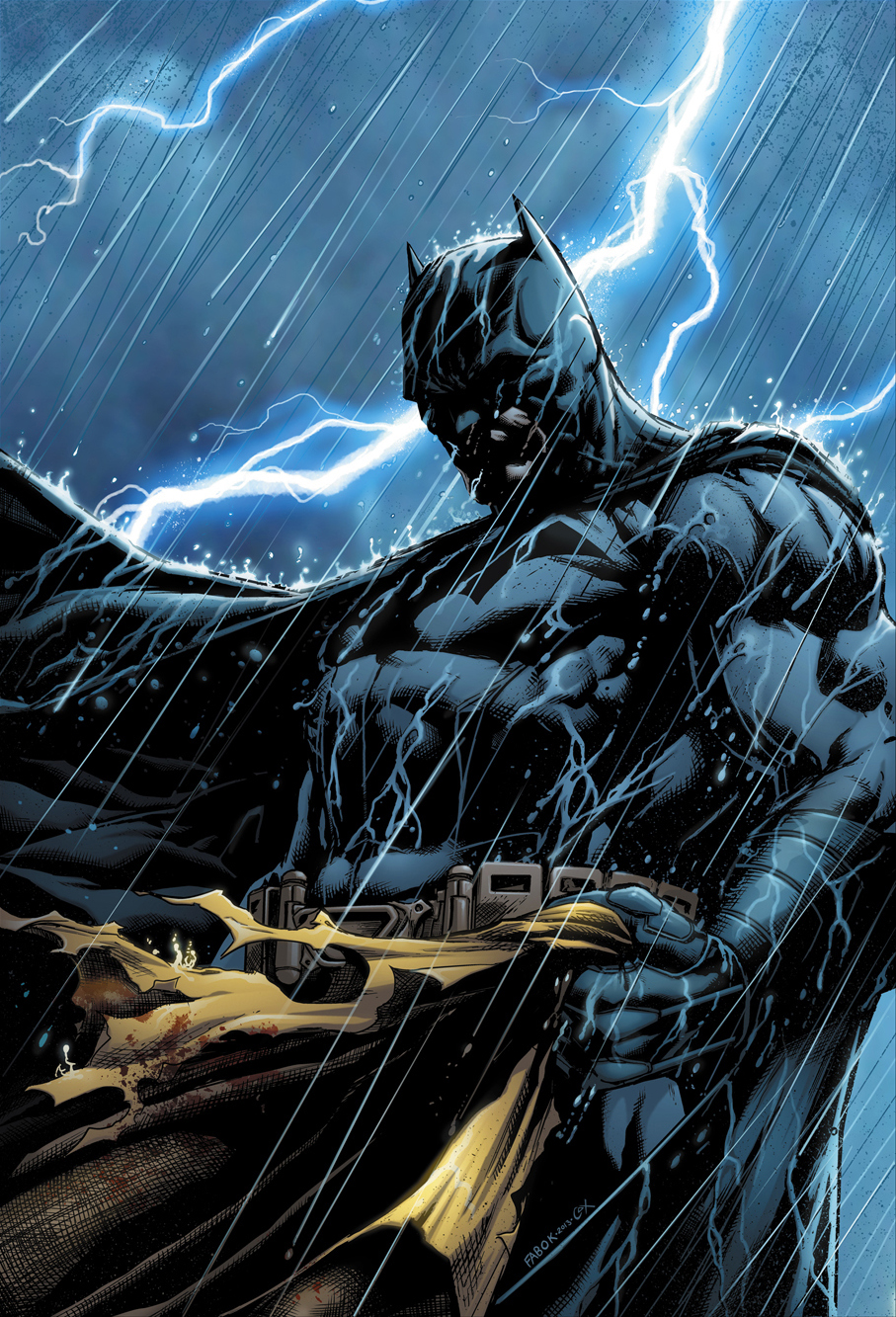 Jason Fabok’s cover had been kept under wraps as it relates directly to Batman Incorporated #8, depicting an angry, rain-lashed Batman, illuminated only in highlights, clutching the rags of Robin’s cape, set against a bolt of lightning in a stormy blue/grey sky. This particular style of cover is not one we haven’t seen before, but it is executed beautifully and the events of the past week in the Bat-world, have given it a poignant gravitas.

Congrats to Jason and DC, they get the paper crown this week! 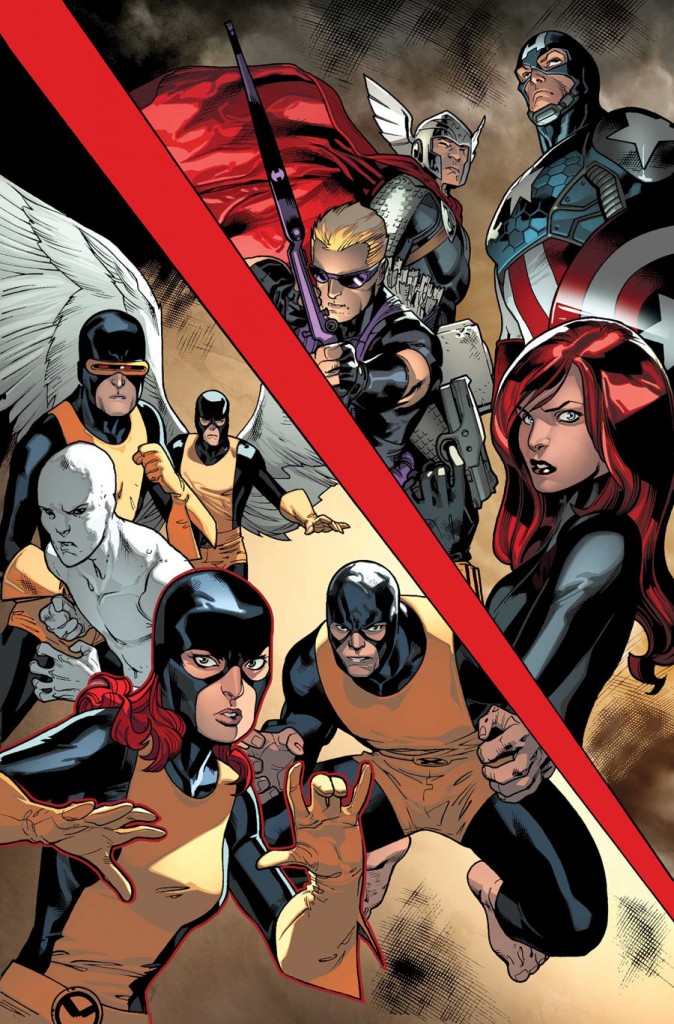 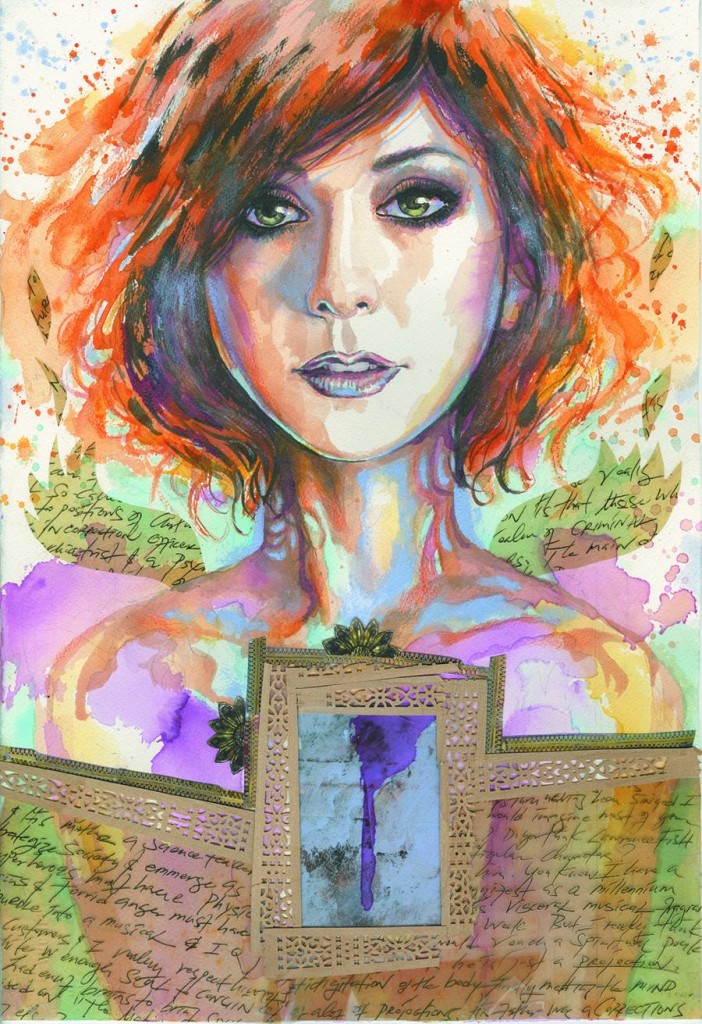 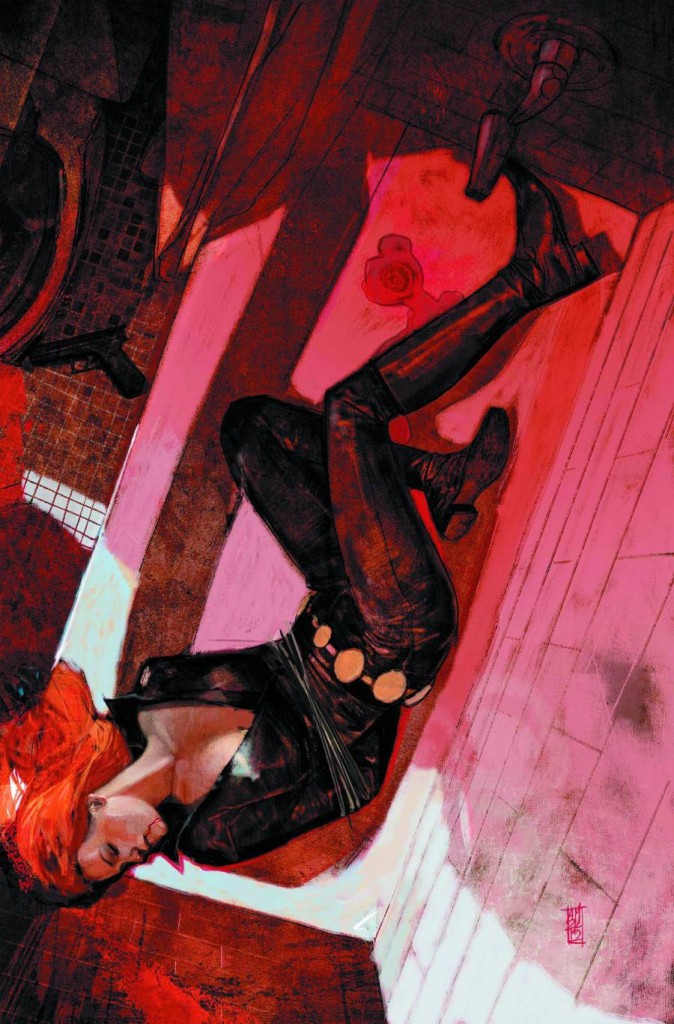 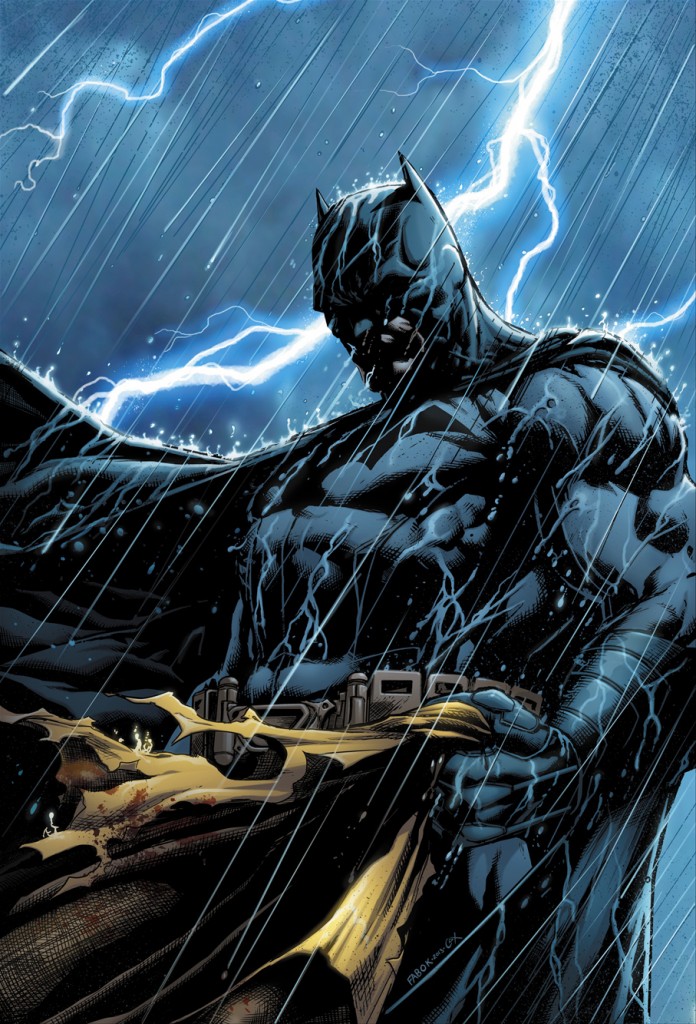 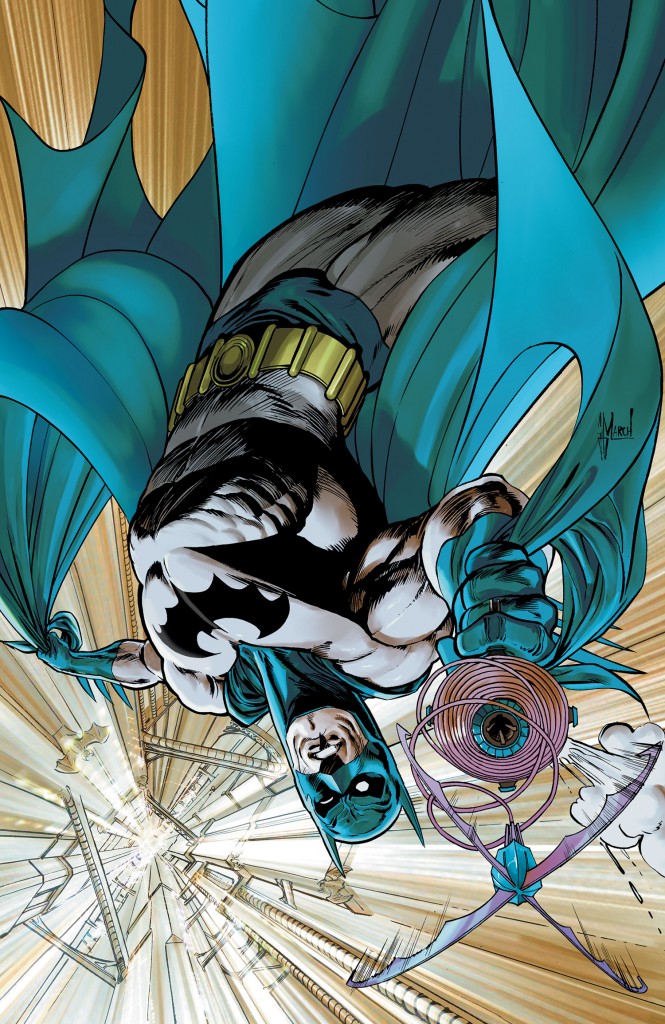 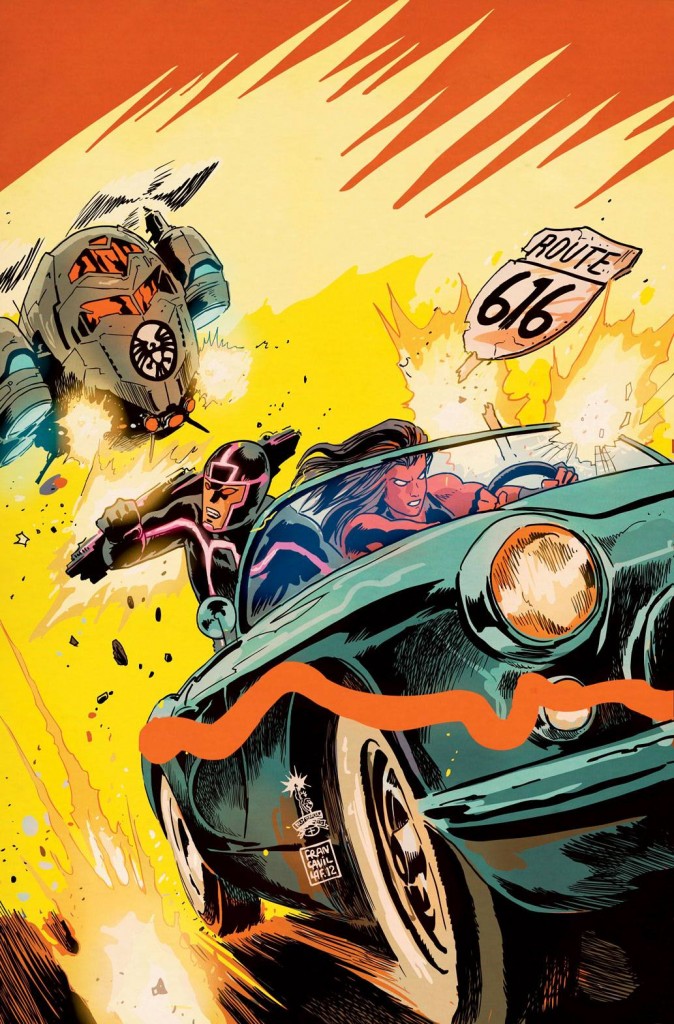 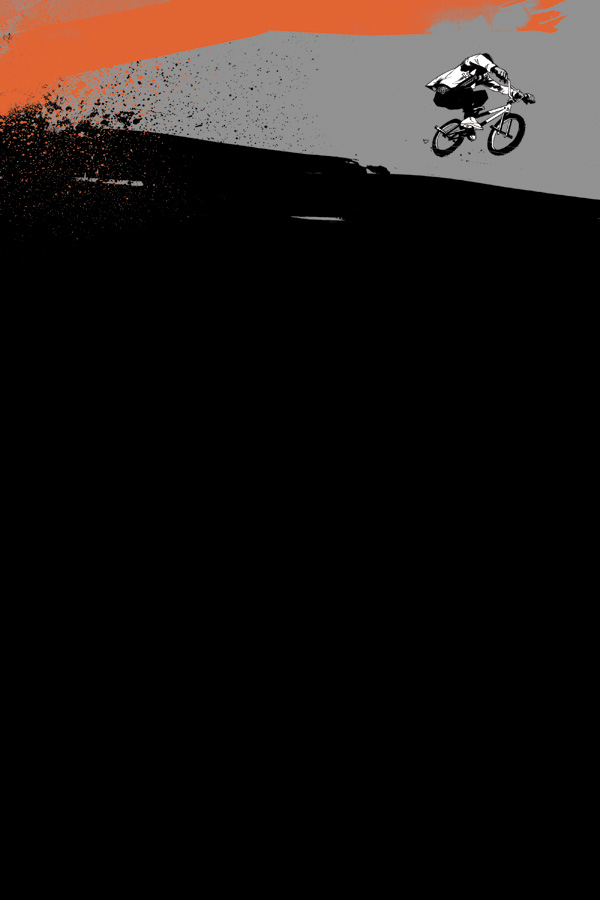 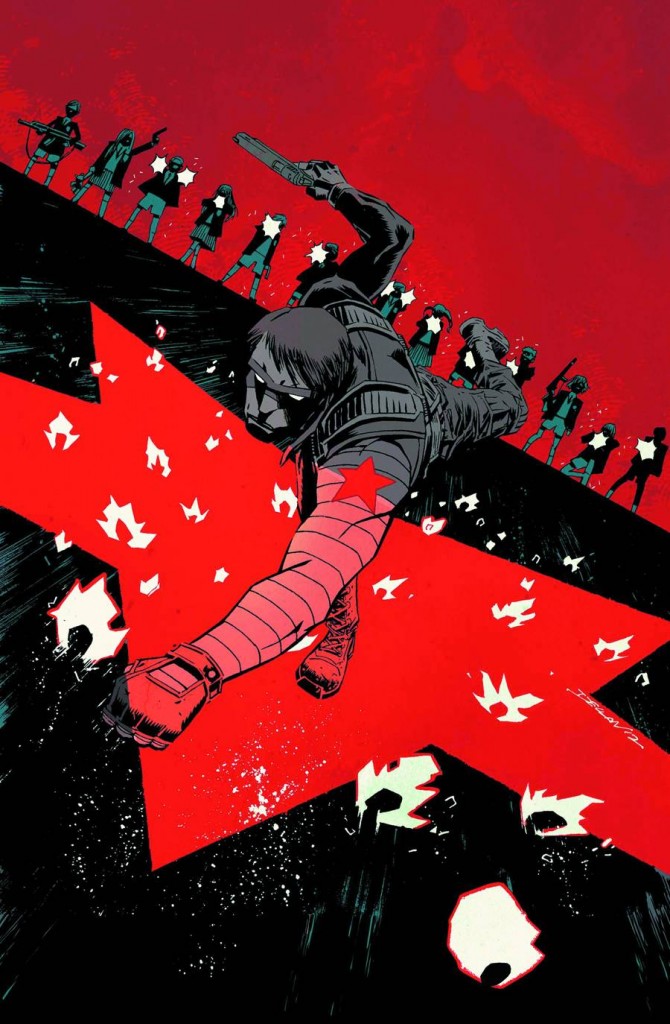