Following the initial glowing reviews from the press screenings, anticipation for the final part of Christopher Nolan’s Batman saga, The Dark Knight Rises, is growing.

If you can’t wait for some Batman action, why not try some of the brand new DC relaunch Batman graphic novel collections, with free postage*…

Following his groundbreaking, critically acclaimed run on Detective Comics, writer Scott Snyder (American Vampire) begins a new era of The Dark Knight with artist Greg Capullo (Spawn) and a new beginning for Batman! In this hardcover collecting the first six issues, a series of brutal murders rocks not only Gotham City to its core but also the Caped Crusader himself when the prime suspect is one of Batman’s closest allies – Dick Grayson! 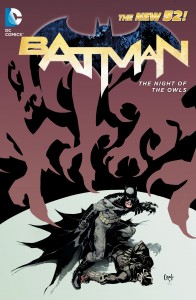 In this new hardcover, evil spreads across Gotham City as Batman’s allies, including Red Robin, Batwing, Robin, Batgirl, the Birds of Prey, Nightwing and even Catwoman find themselves in a battle coming from all sides. The Court of Owls makes its move against justice in this sprawling tale of corruption and violence.

Collecting the acclaimed DC Comics – The New 52 series! Features Batman’s battles with The Scarecrow and Bane, plus the mystery of The White Rabbit!

As a part of the acclaimed DC Comics – The New 52 event, Detective Comics is relaunched for the first time! With the first seven hard-hitting issues from acclaimed writer/artist Tony S. Daniel, Bruce Wayne returns as Batman – and sets his sights on the Gotham Ripper, who in turn has his sights on Batman. Meanwhile, Bruce Wayne explores a budding romance with TV journalist Charlotte Rivers, who’s visiting Gotham City to cover the gruesome slayings. But time is running out as Commissioner Gordon and Batman work to uncover the secret of the dread Dollmaker!

The hit DC Comics – The New 52 series is collected for the first time! Batman and Damian – the new Robin – are driven apart by the insidious Nobody!

Collects the new Batman and Robin #1-8!

The hit DC Comics – The New 52 series that brought Barbara Gordon back as Batgirl is collected for the first time!

Back in her role as Batgirl, Barbara Gordon faces the deadly new gentleman killer Grotesque, who stalks the streets of Gotham City. Plus: The Court of Owls sets its sights on Commissioner Gordon; and an innocent woman sentenced to Arkham Asylum emerges more dangerous than the inmates she was locked up with!

As a part of the acclaimed DC Comics – The New 52, Batwoman’s new series begins from the team of J.H. Williams III and W. Haden Blackman with this title collecting issues #0-5!Who or what is stealing children from the barrio, and for what vile purpose? Will Kate train her cousin, Bette Kane (a.k.a. Flamebird), as her sidekick? How will she handle unsettling revelations about her father, Colonel Jacob Kane? And why is a certain government agency suddenly taking an interest in her? These are some of the questions that will be answered in these spectacular stories!

Six lives, inextricably linked in the past and present, each on a collision course with the others: Batwoman, fighting for duty and vengeance against a threat of arcane power. Detective Maggie Sawyer, investigating a case that could end her career. DEO Agent Cameron Chase, commanding a vigilante she despises. Colonel Jacob Kane, clutching at a life that’s slipping away. Maro, a new villain corrupting Gotham City. And Kate Kane, wrestling with decisions that will test her loyalties.

Collecting the first six issues of the DC Comics – The New 52 series! Meet Selina Kyle, also known as Catwoman. She’s addicted to the night. Addicted to shiny objects. Addicted to Batman. Most of all, Catwoman is addicted to danger. She can’t help herself, and the truth is – she doesn’t want to. She’s good at being bad, and very bad at being good. But this time, Selina steals from the wrong man, and now he’s got her. He wants his stuff back, he wants answers and he wants blood. Writer Judd Winick begins a new chapter for Catwoman – let’s hope she makes it out alive!

Haly’s Circus, where Dick Grayson once performed, returns to Gotham City – bringing with it murder, mystery and superhuman evil. To uncover more clues to why a mysterious assassin is targeting him, Nightwing joins the circus’s tour. But as Dick becomes reacquainted with the big top he once called home, he learns there are darker secrets to be discovered.