DC have announced a brand new He-Man and the Masters of the Universe comic book, debuting in July and offering ‘a brand-new take’ on the legend, who celebrates his 30th year of existence in 2012. The six issue, limited series is written by James Robinson, with pencils by Phillip Tan and inks from Ruy Jose. 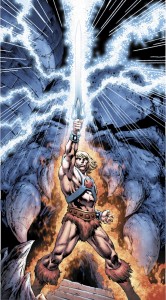 Look out for it in May’s preorders.