Can it really be a year, really? So much has happened in 2015 that it has flown past as I contended with a major wedding anniversary, my 60th birthday, a big family holiday, moving house, helping with the organising of Invasion Colchester, Free Comic Book Day, Halloween Comicfest, visiting the far flung corners of the ACE Empire, plus managing the constant changes thrown at us this year by Marvel and DC. As I write this column it is just two weeks before ground zero and as usual I have yet to decide on what to buy! I find myself like a rabbit stuck in the headlights of a car unable to move (buy) with my brain turned to mush. I expect my wife is buying me a dog house for Christmas as that will be where I will be spending Boxing Day if I don’t get shopping soon! Still, that’s for later, for now let us get back to basics and talk comics.

The new Marvel launches have taken me by surprise as the quality has been very high. I have enjoyed all the titles I am reading and found that the Daredevil relaunch to be the best Daredevil story in literally years. The new art style was truly refreshing and Matt Murdoch’s character was more like the days of yore. Upbeat and swashbuckling is how I like it and that is what has been delivered.

Nova has lost none of its’ youthful freshness, still a great all ages comic, the Guardians Of The Galaxy is still madcap adventure and Invincible Iron Man is absolutely fabulous – art to die for and a strong storyline with a Tony Stark that I can relate to.

The one comic that I felt was below par was Amazing Spider-Man. The story was fast paced and well told, the art was great, but this was not a ‘Peter Parker having problems’, this was an almost Batman-like Peter, forward planning and ultra-confident. For my tastes this doesn’t work, but I have been reading this for 50 years and I suppose I have an old fashioned view of how Peter should act and behave.

So Marvel’s Christmas present to the comic buying world is good comics.

One last observation for 2015 – Disney own Marvel Comics, the largest USA publisher of comics. They also own the rights to Mickey Mouse and all. So who is publishing Disney comics? Of course, IDW(?)! And a bang up job they are doing too! What a crazy world we live in when presumably Disney feel the comics will not make them enough money to spend time publishing these titles themselves. They must feel a fee from IDW is simpler and better. The guys at IDW really care about comics and comic history so they are in actuality, the best place for Mickey and friends anyway.

Happy Christmas and a sober New Year from us all at ACE Comics, Red Hot Comics, Economic Comics and our store staff!!
Mission for the month: Be bold and buy graphic novels as presents this festive season…

Biff’s Christmas Bit is taken for the latest edition of our FREE webzine, Illuminations, available to download by hitting the image below: 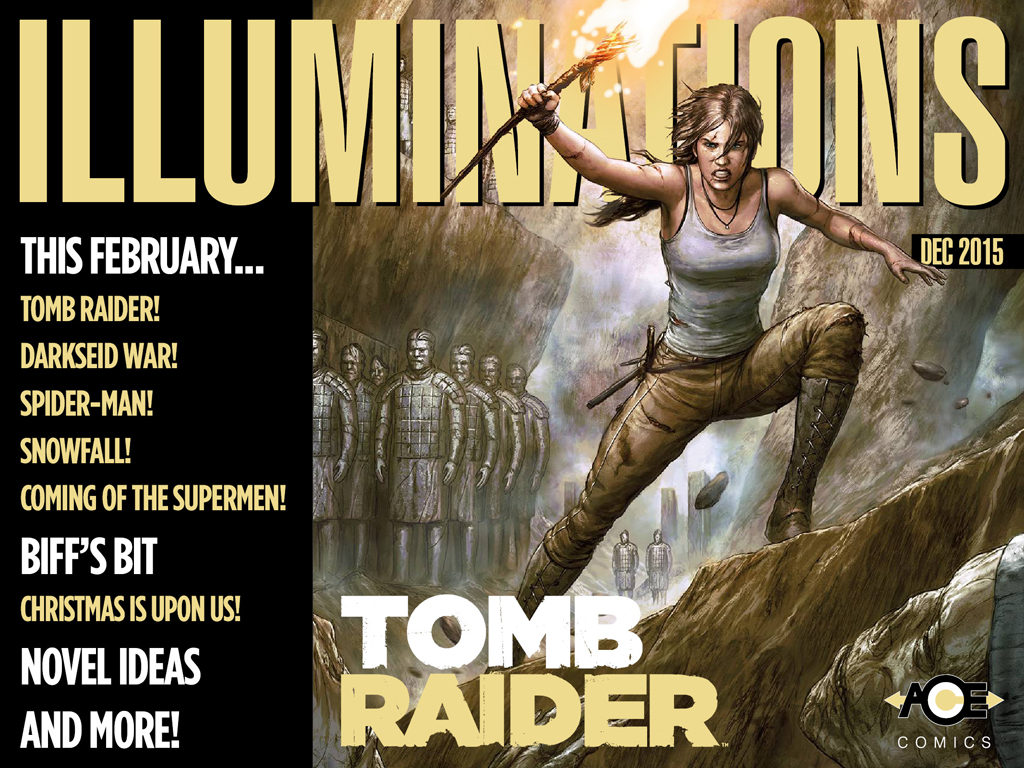