The third Avenger on our list is also ‘the first’: Captain America: 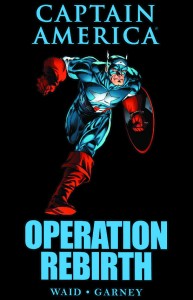 “The death of Captain America?! The world again believes Captain America dead, but his life is saved by one he himself thought lost forever: S.H.I.E.L.D. Agent Sharon Carter, the gallant girlfriend he saw perish in flames long before! But his one-time true love has only rescued him on behalf of his deadliest enemy, the Red Skull, who can’t conquer the world until he and Cap stop Adolf Hitler and the Cosmic Cube from doing it first! Will working with one evil against another cost Cap his place as the U.S.A.’s premier protector? Guest-starring the Avengers and Doctor Doom! Collecting CAPTAIN AMERICA #444-448 & #450-454.”

Writer Mark Waid and artist Ron Garney revitalised Cap in the 1990’s through the reintroduction of Cap’s former flame Sharon Carter and the repositioning of the Red Skull as a genuine threat to the Marvel Universe. ‘Re’markable! 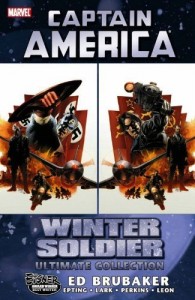 ” A midnight call to duty brings Captain America aboard the S.H.I.E.L.D Heli-carrier to identify the corpse of his most feared adversary: the Red Skull! The shocking murder of Cap’s oldest enemy may not be the end of the Skull’s plans, however, because whoever shot the Skull has stolen his final project: an unfinished Cosmic Cube with the potential power to alter reality itself. Adding to the imminent danger, a cadre of the Skull’s followers has already set in motion a plan to ignite bombs in the hearts of Paris, London and Manhattan – causing untold death and destruction. Racing against these bombs’ rapidly ticking clocks, the Star-Spangled Avenger must not only solve the mystery of his nemesis’ murder, but find the Cube before it can be used in the Red Skull’s malevolent plot against the United States! Then, the questions plaguing Captain America’s dreams and memories have been answered in the most brutal way possible. And in the wake of this brutality, General Lukin makes his first all-out assault – tearing open old wounds and threatening to make new scars that will never heal! Collecting CAPTAIN AMERICA #1-9 & #11-14.”

Ed Brubaker made Cap essential reading when he took over the title in the 00’s. Controversy was courted with the reintroduction of Bucky Barnes, but Brubakaer’s skill along with a gritty, thriller of a tale made this a true success. Pretty much essential. 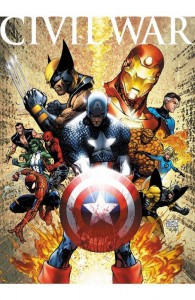 “The landscape of the Marvel Universe is changing, and it’s time to choose: Whose side are you on? A conflict has been brewing for more than a year, threatening to pit friend against friend, brother against brother – and all it will take is a single misstep to cost thousands their lives and ignite the fuse! As the war claims its first victims, no one is safe as teams, friendships and families begin to fall apart. The crossover that rewrites the rules, CIVIL WAR stars Spider-Man, the New Avengers, the Fantastic Four, the X-Men and the entirety of the Marvel pantheon! Collecting CIVIL WAR #1-7.”

Revolving around the Superhero Registration Act, ‘Civil War’ was the Marvel crossover event from 2006. While Iron Man was pro-registration, Cap created a renegade squad in opposition to the liberties the heroes would have to give up. Mark Miller writes a socially and politically charged tale featuring some truly great fight scenes between Cap and Iron Man.

“Stripping some of their most iconic characters down to their roots and updating them for modern life. Captain America, Iron Man, Hulk, Thor, Giant-Man and the Wasp form this small but lethal army serving the US government – after the Hulk has rampaged through New York City, it’s Ultimate vs Ultimate as the infighting begins. With the city in ruins, can they pull together to face their greatest threat yet?”

When Marvel introduced the ‘Ultimate’ universe in 2000, it was with the intention of reinventing their heroes for a modern age, and that’s just what writer Mark Miller did. Out went Cap’s previous ‘boy scout’ image and in came a gritty soldier less averse to breaking rules in order to get the job done. A refreshing take on the first Avenger and clearly a visual inspiration for the movie interpretation of Cap.