First up is Iron Man: 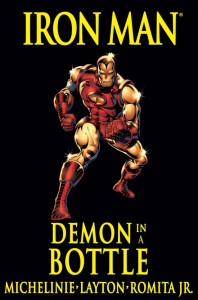 Iron Man: Demon in a Bottle

“Iron Man faces his most untouchable foe in criminal industrialist Justin Hammer and his literal army of super-villains! But can the Armored Avenger overcome an even more implacable personal demon, invulnerable to technology or wealth? Guest-starring Ant-Man and the Sub-Mariner! Collects Iron Man #120-128.”

‘Demon in a Bottle’ is widely regarded as the greatest storyline in Iron Man’s history. The idea of an alcoholic hero was virtually unheard of at the time, and Tony’s relationship with the bottle marked a genuine and grim weakness that his character has carried ever since. Couple this with boardroom battles with Justin Hammer and S.H.I.E.L.D., and this nine issue run indicates a maturity in Iron Man’s adventures. 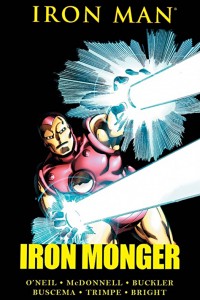 “He’s lost his armor and his fortune, but not his nerve! Tony Stark’s back on his feet after everything Obadiah Stane has thrown at him, but now the bilious billionaire is taking away Stark’s friends…one of them forever! The enmity spanning more than thirty issues ends in a steel-plated slugfest from which only one can walk away! Plus: vision quests and extradimensional intrigue! Madame Masque and Thundersword! And the debut of the Scourge of the Underworld! Guest-starring the West Coast Avengers! Collects Iron Man (1968) #193-200.”

‘Iron Monger’ only collects together the final 7 issues of Tony’s conflict with Obadiah Stane (this arc actually began around issue #160), but it’s the pinnacle of a storyline that sees Tony hitting rock bottom again (echoing themes from ‘Demon in a Bottle’) losing control of his company, his fortune, his alter ego and his life. The ‘Silver Centurion’ armor is created and Tony retakes the mantle of Iron Man and rises from the ashes once again. 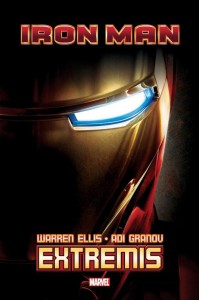 “It’s the beginning of a new era for Iron Man! Renowned scribe Warren Ellis joins forces with acclaimed illustrator Adi Granov to redefine the armored avenger’s world for the 21st century – a landscape of terrifying new technologies that threaten to overwhelm fragile mankind! What is Extremis, who has unleashed it, and what does its emergence portend for the world? Collects Iron Man (2005) #1-6.”

In 2005, Warren Ellis helped to reinvigorate the Iron Man franchise with ‘Extremis’, a six-issue run that rewrote Tony’s origin story and, with the help of Adi Granov, significantly redesigned the armor for new generation. Many element from this arc, as well as the aforementioned ‘Iron Monger’, were used in the first Iron Man movie and Adi Granov has designed all seven movie armors too.

“Iron Man 2.0 is here – and Tony Stark isn’t the one who made him! Ezekiel Stane is on the scene and fixated on avenging the death of his father, Obadiah. Every bit as ruthless and ten times as smart, the younger Stane is all five of Stark’s nightmares rolled into one – and his perversion of Stark’s technology into a weapon capable of slaying hundreds of innocents at a time starts the clock ticking on a chess game Iron Man must win! Then, Tony goes on the run from Norman Osborn! Osborn now has all the power he ever wanted minus the most important ingredient, the registration database, which is stored in the only place Stark could guarantee its safe keeping – inside his Extremis-enhanced brain. Collects Invincible Iron Man #1-19.”

This volume represents the successful new take on Iron Man as ‘Invincible Iron Man’ debuted alongside Jon Favreau’s first Iron Man movie. Author Matt Fraction draws from the film along with incorporating the best elements in Iron Man’s history to produce a definitive Tony Stark. The material from ‘Invincible’ has gone on to influence the Iron Man movie character that it was semi-based on.