Number two on our list is the Black Widow: 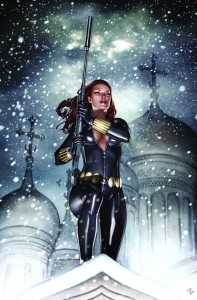 “She’s been everything from a Russian espionage agent to a Champion to an Avenger… now a skeleton from Natalia Romanova’s past is reaching out for those she’s loved and lost, and the Black Widow has many victims to choose from! From the frozen streets of Moscow to the upper stratosphere, writer Paul Cornell (Captain Britain and MI13) and artists Tom Raney (Dark Reign: Hawkeye) and John Paul Leon (The Winter Men) deliver a globe-hopping, bone-breaking, high-tech thriller that reveals how Natalia’s shadowy past threatens all she now holds dear. Guest-starring the Winter Soldier and Wolverine! Collects Black Widow: Deadly Origin #1-4.”

Despite a somewhat confusing narrative courtesy of jumping between past and present,’Deadly Origin’ is a decent account of the rise of Romanova. Illustrated beautifully, it serves as a great introduction to the character. 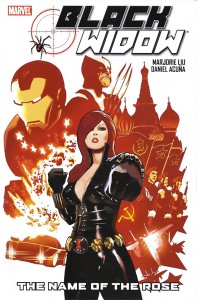 Black Widow: Name of the Rose

“The Black Widow’s house of cards is crashing down around her! As one of the world’s greatest spies, the Black Window lives in lies and half -truths. Her long career in espionage has spun a web of deceit decades long. Her fellow Avengers and her lover, Captain America, can never know all the blood she has on her hands — even if they wanted to. Although her heroics have redeemed her, she can never escape her past or all the lives she’s led. What is the one secret she buries the deepest? Is she hiding something that would destroy everything she’s worked for? More important, what will she do to keep it hidden? Collecting BLACK WIDOW #1-5 and material from ENTER THE HEROIC AGE #1.”

Marjorie M. Liu carefully unfolds the level of mystery in ‘Name of the Rose’, a geniune spy-thriller that has garnered many positive reviews and is considered essential, modern-day, Black Widow reading. 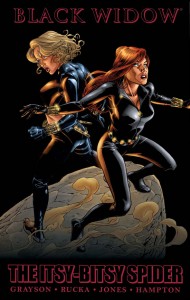 “Natasha Romanov has always led an exciting life — first as a Cold War-era Soviet spy, followed by her defection to the West. She has earned a reputation through the years as a consummate professional, coldly efficient and as deadly as her namesake. Now, her time as Black Widow may be at an end. Yelena Belova, the new Black Widow, seeks to claim the mantle she feels was stolen from her Motherland. Trained in the arts of espionage and combat, and anxious to prove herself and eliminate her counterpart, Belova will stop at nothing to achieve her goal. The battle of the two Widows rages from the deserts of the Middle East to New York’s Upper West Side. When the smoke clears, will either be left standing? Collects Black Widow (1999) #1-3 and Black Widow (2001) #1-3.”

It was the Marvel Knights mini-series of 1999 that brought the Black Widow into the modern era, as Devin Grayson re-established the character first and foremost, as a spy and elevated Natasha to become one of the Marvel Knights’ most popular characters. 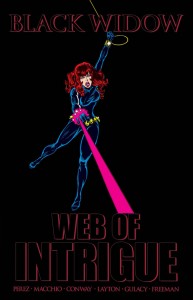 “It’s been a long lively life for Natasha Romanova – in the Avengers, the Champions, S.H.I.E.L.D. and elsewhere – but could it end with her surrounded by international assassins? Old enemies and new are using her instructor, her mentor and her ex-husband against her – or so it seems – but who and what can be trusted in a spy’s landscape of lies? Guest-starring Nick Fury, Jimmy Woo and other espionage experts! Collecting MARVEL FANFARE (1983) #10-13; BIZARRE ADVENTURES #25 and BLACK WIDOW: THE COLDEST WAR GN.”

The Black Widow began to emerge as a character in her own right thanks to stories such as those contained is this great hardcover. The Marvel Fanfare issues in particular demonstrate Natasha as much more than a supporting cast member as she pursues an extremely challenging target – her father!