Agent Phil Coulson, a key operative for the Strategic Homeland Intervention, Enforcement and Logistics Division, or S.H.I.E.L.D. as they’re more commonly known, has joined the Marvel Comic Universe in Battle Scars #6, which hits the shelves today!

Coulson has been portrayed by Clark Gregg in Iron Man, Iron Man 2, Thor and Avengers Assemble (which is released TOMORROW!!)

” “From the first second, I knew I wanted Agent Coulson in there,” says BATTLE SCARS writer Chris Yost of the character’s comics debut. “He’s such a great part of the Marvel Cinematic Universe, he’s made his way onto [the ‘Ultimate Spider-Man’ animated show], and I figured if there was going to be this new ‘Nick Fury’ [in Army Ranger Marcus Johnson] he needed his own Phil Coulson. So when I pitched who Marcus Johnson was, his friend Cheese came with him.” ” 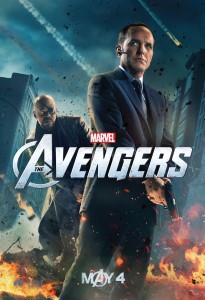